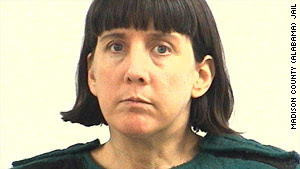 Amy Bishop, a neuroscientist trained at Harvard - that's where your humble correspondent has spent six years - and working as an assistant professor at University of Alabama in Huntsville - that's where John Christy and Roy Spencer create their UAH datasets, among other things - has killed three of her colleagues and injured additional three biologists during a faculty meeting.

They refused to give her tenure.

Robert Yen, a chimpanzee, is thrilled by the murders and suicides in the Academia. He thinks that they prove that something is terribly wrong over there. Well, they do and they don't. The scholarly environment, which includes an explosive mixture of a breathtaking hypocrisy, frequent boredom, and high expectations, among other positive and negative things, may have a higher suicide rate but I think it's clear that it doesn't have a higher murder rate. And the reasons for the murders are not so dramatically different from the reasons in many other sectors.

In this case, the (future) money and personal prestige were at stake. Although they have been colored by the Academic system in various subtle ways, the essence of the emotions that lead some people to kill because of those matters can be found outside the Academia, too.

CNN wrote about some previous criminal confrontations of Dr Amy Bishop, especially in a pub: she was charged with (lithium) battery, assault, and disorderly conduct in 2002. ;-)


There have surely been other conflicts. For example, a few months ago, she was very angry that the UAH freshmen and sophomores were suddenly required by the university to live on campus since Fall 2010: the new policy would destroy "diversity" according to Dr Amy Bishop. But these stories couldn't have been enough to safely predict that she would ever kill several people. No one could have predicted it. No one can treat people who make havoc in a pub as future killers. Most of them are not.

I would still mention a few points:

1) This woman is innately not a typical woman: she has thinking similar to male thugs. Serial killers usually have to. But don't get carried away: killers obviously can be both male and female. So I wouldn't blame this murder on her being too female and I wouldn't expect her to be the most typical feminist. But just because one killer happens to be a female, I wouldn't think that this shows that feminism is evil, or something like that (it's been shown a long time ago, anyway).

2) It's very unhealthy for many people to be obsessed with tenure. It was clearly the main reason of this capital murder. They didn't give her tenure and she killed them. I've been annoyed by many people's primary obsession with their careers and tenure, and there are so many people whose priorities are ordered in this way in the Academic system that they seem to believe it's the standard - or the only possible attitude - to consider all of science just as a tool for themselves to get certain material advantages.

The only reason why many of those people haven't killed anyone yet is that they actually did get the tenure. ;-)

3) As a woman (de iure), she may still have been used to the idea that no one can ever turn a woman (or even her) down. I have met quite a few women who have been educated to think in this way - by the PC establishment. Believe me, if these bitches do something bad to you e.g. at Harvard, you have virtually no chance to defend yourself. It's how the system is adjusted. And I have also met many women - and maybe many more than the number in the first group - who would never abuse their gender to get something they don't deserve.

(Many of the CNN commenters discuss the feminist takeover of the Academia in detail.)

So some women surely do get much more than they deserve, because of political correctness, and they expect to be victorious in everything throughout their lives - because that's often how it has worked for them up to their postdoc jobs or even junior faculty jobs. It sucks. But it's still true that typical feminists are just whining about these things and blackmail others psychologically. To shoot, one needs to have some balls (in this case, negatively colored ones), too.

But maybe I am wrong. Maybe it was just a coincidence that the obnoxious Harvard feminists haven't shot anyone during their witch hunts against Larry Summers. (The closest event to this one I know - when a fanatical feminist critic of Summers killed someone - was the suicide of the UC Santa Cruz boss, Denice Denton.)

Given the available evidence, I find it unreasonable to politicize this murder or use it as a method to strengthen one's pre-existing opinions about various groups of people. This episode has neither increased nor reduced my beliefs in various things. It's a murder driven by obvious egotistic reasons and its detailed circumstances should be neither overgeneralized nor framed as proofs of some general far-reaching statements.

But yes, I know. Boston Herald cites a family source that said that she was/is a far-left political extremist who was/is “obsessed” with President Obama to the point of being off-putting. You won't find this information in too many newspapers but I guess that if she were conservative, you would.
Luboš Motl v 4:15 PM
Share