In December, CDMS announced the detection of two dark-matter particle candidates. That has made the explanations "without any dark matter" just somewhat contrived - chances were around 20% that such a result could be produced by chance, without dark matter. No convincing proof of anything.

Can a hockey puck in Minnesota discover the superpartners before all the big colliders?

However, CDMS's smaller brother in the same Soudan mine in Minnesota, CoGeNT (Coherent Germanium Neutrino Technology), which only has one hockey puck - the same puck that the Finns used to humiliate the Czech ice-hockey players in Vancouver, but one made out of germanium - is reporting a more surprising observation today:


Nature: A CoGeNT result in the hunt for dark matter
arXiv preprint: Results from a search for light-mass dark matter with a p-type point contact germanium detector


The preprint has 27 authors but you should never get carried away by such consensus: they can still be doing something silly (especially the interpretations of what they see). For example, they had to drink something because they think that the CoGeNT collaboration has collaborated with 22 other CoGeNT collaborations :-) - mistakes sometimes occur.


At any rate, they claim to have observed hundreds of low-mass events that can't be easily explained by physics that excludes dark matter. And they believe that a very light WIMP - between 7 and 11 GeV - is their preferred explanation.

You may be shocked by such a light WIMP: can e.g. the (otherwise) most natural WIMP candidate, a neutralino, be compatible with that? Surprisingly, the answer is Yes, but one must sacrifice a bit.

If you look at the recently updated Bottino et al. 2003 preprint about light neutralinos and WIMP direct searches, you will learn that LEP directly constrains the chargino only: it must be heavier than 100 GeV or so. As a result, the neutralino must be heavier than 50 GeV or so, but only if you also assume a GUT-induced relationship between the U(1) and SU(2) gaugino masses.

The paper relaxes this condition and discusses the neutralino mass range 6-25 GeV which includes the whole CoGeNT interval 7-11 GeV, so anyone who is interested in the CoGeNT result may want to read the paper by Bottino et al., among others. When the neutralinos are this light, they're mostly binos, with a small aftertaste of the z-component winos, and even smaller trace of higgsinos. A light bino also requires a pretty light stau, probably below 100 GeV for astrophysical reasons. It may actually be compatible e.g. with the F-theory models (although they were claimed to predict a gravitino LSP). 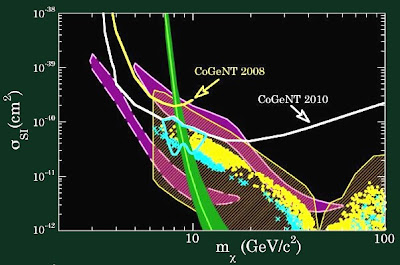 Click the picture to zoom in a little bit.

Some vague links with the fuzzy statements by DAMA/LIBRA are included. The graph above depicting the observed hints of WIMPs looks like a complete mess because the observations are in a nearly complete mess :-) but the intersecting region above the mass of 10 GeV is the best consensus of the incomplete observations so far - which doesn't yet mean that there's an answer. :-)

OK, let me explain you the graph. By the way, the colors are reverted relatively to the preprint, so if there's a bias you inherit by attributing colors to various things, I have exactly canceled the bias! :-)

The surprisingly narrow light green vertical strip favors the two CDMS events. The two purple diagonal regions are favored by the DAMA/LIBRA annual modulation. It has two components because the lower, dashed region includes ion channeling. The yellow dots (and probably also the cyan crosses, I am not sure about the difference) are models from a hep-ph yellow book (telephone directory) and they're contained in a brownish region which spreads them by their uncertainties. The nice, small, cyan, tooth-shaped region above 10 GeV contains the 90% confidence interval in WIMP coupling. This could be real. Or surreal. ;-)

The existence of a light WIMP could make some space experiments looking for heavy ones obsolete - but as Neal Weiner mentions, there can exist both light and heavy WIMPs (although politics and finances would surely distort the people's opinions how plausible it is for both kinds to exist at the same moment).