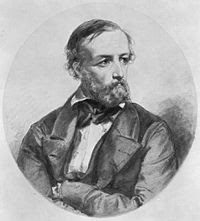 Johann Peter Gustav Lejeune Dirichlet was born on February 13th, 1805, i.e. 205 years ago, to a father who was a postmaster in Düren, one of the most Western towns in Germany.

At the high school, he learned from Georg Ohm. Dirichlet began his research of mathematics with some progress in proving Fermat's Last Theorem for n=5 (partially) and, later, n=14 (fully). He has done a lot in number theory, the Riemann zeta function stuff, probability theory, Fourier expansions, and so on. He gave us a definition of a function that is still being used.

He married Rebecca Henriette Mendelssohn Bartholdy, a woman from a highly achieved family of composers and Jewish converts to Christianity.


There are dozens of concepts named after Dirichlet. Many things he co-fathered are usually not named after him: that includes the Voronoi diagrams and the Pigeonhole principle claiming that at least two out of M pigeons have to live together somewhere if you have N boxes for them and N is smaller than M. ;-) Like other things, this leads to some controversial conclusions when applied to infinite sets (and the numbers are cardinal numbers).

But string theorists surely know him for the Dirichlet branes that were discovered more than 130 years after his death, mostly by Joe Polchinski. They are named after the Dirichlet boundary conditions (x=0 or another constant at the boundary value of sigma).

Note the striking difference between the complexity of Dirichlet's given names - Johann Peter Gustav Lejeune - and the simplicity of the given name of Polchinski who superseded him - Joe. In some respects, the civilization has made a lot of progress. ;-) More seriously, Dirichlet has studied lots of related issues and I am confident that he would be a good string theorist today if he didn't die in 1859.

Also, exactly 100 years ago, William Shockley, the main father of the transistor, was born in London (before he was raised in Palo Alto, CA). He did lots of things in condensed matter physics but also became a eugenicist. In the 1980s, he won a lawsuit against some people who called him a "Hitlerite". He received a whopping compensation of USD 1 from them. ;-)