You may remember that the first paper that used the new LHC data was written by the ALICE Collaboration. 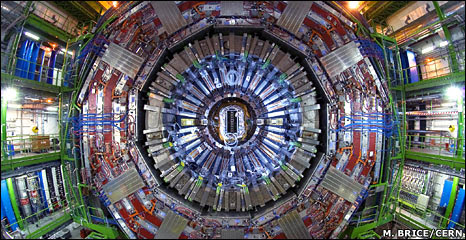 However, let's admit that it is ATLAS and CMS whose reports are even more eagerly expected. The CMS Collaboration became the first of them who published a preprint based on the December 2009 data:


Transverse momentum and pseudorapidity distributions of charged hadrons in pp collisions at sqrt(s) = 0.9 and 2.36 TeV (PDF)

They looked at the proton-proton collisions whose center-of-mass energy was either 2x 450 GeV or 2x 1.18 TeV. The average transverse momentum of charged hadrons (mostly pions and kaons) is something like 0.5 GeV only (so you should be able to recognize a heavy new transversely flying particle), the pseudorapidity density is around 4. See the paper to learn more.

The increase of charged-hadron multiplicity densities with energy (obtained from a comparison of the completely new 2.36 TeV data vs previously measured 900 GeV events) seems to be faster than expected. Needless to say, this is not even a marginal contradiction with the Standard Model, just with some messy calculations in QCD (and nuclear physics) that the people have to adjust to agree with the observations.


See also Azo Nanotechnology for a popular presentation of the paper and Collider Blog for a semi-technical one.

By the way, the newest episode of The Big Bang Theory was called "The Large Hadron Collision". Leonard decided whether Penny or Sheldon may accompany him on his trip to the LHC: watch at Zshare. Meanwhile, Jim Parsons drew the NAB award.
Luboš Motl v 9:38 AM
Share