Tom Weidig has sent me this article on Science Daily,


Holger Müller of UC Berkeley and two other members of his U.S.-German team - Achim Peters of Berlin and Steven Chu of Berkeley, LBNL, and Obama's DOE (Chu took the data 10 years ago, but couldn't realize what they meant, thanks to Steve for a hint) - have measured the "slowdown of time" in the gravitational field 10,000 more accurately than the previous most accurate method. Needless to say, general relativity still works perfectly. The results are published in Nature today. 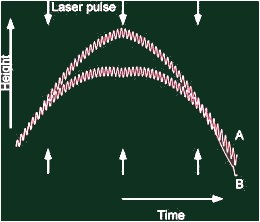 Millions of cesium atoms are trapped and some of them are moved vertically just by 100 microns in the Earth's gravitational field. The interference between the two parts of the wave function, phase-shifted by the gravitational field, may be measured. They talk about the latent energy, "E=mc^2", because it doesn't cancel: when calculating the phase shift in between the two components of the wave function, the latent energy is being multiplied by different time durations on the two trajectories at different altitudes (because of the redshift): thanks to commenter Steve.


At any rate, you may also view the experiment as the most accurate available proof that gravity is a fundamental force and not an entropic force because by seeing the interference and phase shift, they also prove that the "number of states" corresponding to a cesium atom at any altitude has to be independent of the altitude.

To get some historical perspective, the first measurement of the gravitational redshift predicted by Einstein's theory of gravity was the Pound-Rebka experiment based on the Mössbauer effect (yes, I took the picture of the Jefferson "tower" at Harvard). However, space-borne hydrogen masers have improved the accuracy 10,000 times, and the new experiment claims to have improved the accuracy by another factor of 10,000.

I would need to see the paper to decide whether the statement is correct and whether the latent relativistic energy actually plays any role in it. The latter point was clarified by Steve in the comments, thanks. Yes, it's right - and so unusual to see "mc^2" uncancelled that I am not surprised that Chu couldn't see that he measured the redshift for 10 years. ;-)
Luboš Motl v 10:07 AM
Share