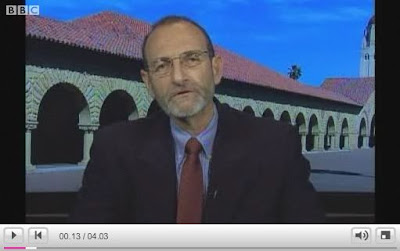 BBC has interviewed Chris Field of Stanford, a co-chair of the second working group of the IPCC, who deeply regrets the GlacierGate mistake, mentioning that there are others.


Well, I think it is sheer populism, flattering to the tens of thousands of freeloaders in the green and propaganda industries, to hesitate with the imprisoning of this particularly arrogant crook.

Video interview: the stunning arrogance of R.K. Pachauri (4 times 5 minutes). Note e.g. his comments about Lord Monckton around 5:30 in the first part. Pachauri even still wants to get the money for the "glaciers to be gone in 2035" grant proposal. He's a complete lunatic. Do you know what's the difference between Pachauri and Hitler? Hitler didn't think he was Pachauri. Hat tip: Willie S.

By the way, in an interview for The Financial Times (orig. source), Pachauri also said that he hoped that asbestos, a carcinogen, is applied to the faces of all climate skeptics as talcum powder every day. Pachauri is a lethal threat for billions of people in the world.

Thank God, Carnegie Corporation rejected to give the desired funding to Pachauri's fraudulent "TERI" group today. But "TERI" may still rob many other charities or, more likely, governmental foundations (where the officials donate money from other people's pockets: e.g. EU taxpayers).

And even Greenpeace U.K., or at least its director John Sauven, says that Pachauri has to resign because he handled errors inappropriately.

In the BBC program, Roger Pielke Jr complained that the expert literature in his discipline - losses caused by climate change - was misinterpreted and distorted by the IPCC.

The literature agrees that virtually all of the increased damages caused by the natural disasters are linked to the increasing wealth that can be damaged in the first place - not by the increasing inherent "destructive power" - while the IPCC tried to deliberately obscure this point.

Trees grow faster than in recent 225 years, at least in the Eastern U.S., some people claim. It surely sounds logical that more plant food - CO2 - could help them. Except that there seems to be at least a slight tension with the findings of the papers supporting the "divergence problem".

Phil Jones says that the global warming data are as rock solid as his professional etiquette. It's been found that his 1990 paper with Wei-Chyung Wang was based on fraudulent data, too. Jones claims he is innocent and blames Wang. However, Wang's university claims that they will deny everything, too. George Monbiot wants Jones, Pachauri, and the spokeswoman of UEA to resign.

California introduces a network that will monitor all your greenhouse gases. So be careful about your breathing in your bedroom and especially your cattle because methane monitoring will be perfect. The state wants to terminate 25% of the greenhouse emissions in 10 years.

Union of Corrupt Scientists thinks that the bill blocking the EPA authority to "curb global warming" is an "attack on science". Oh, really? I thought EPA was a governmental, not scientific institution.

It's getting hot here, an alarmist website, protests against Obama's nuclear plans. They will "set back race against global warming", meaning that they will slow down their efforts to cripple the whole civilization.

The Huffington Post is also upset about Obama's nuclear inclinations and links them to the peace Nobel prize laureate's desire to promote weapons proliferation. ;-)

Meanwhile, Obama's State of the Union address also suggested that he's gonna cancel the Constellation project - the bulk of the planned space research for a decade - without offering an alternative. That's extremely bad. Obama: F for fail.

The British laborist government wants to produce artificial floods in the English farmland. The new wetlands should make millions of Britons to starve to death and therefore help to fight against global warming, while increasing the diversity of pests.

Solar Cycle 24 strengthened rapidly during recent months, after lots and lots of hesitation.

According to China Daily, Chinese Academy of Sciences and many key official Chinese scientists seem to consider the causes of climate change and the predictions for the future an issue open to a debate and further research. Thanks, Achgut!
Luboš Motl v 8:58 AM
Share