Lord Monckton explains the IPCC definition of a spade

I have never seen this talk by Christopher Monckton and it's just cool!

You know, the IPCC wouldn't call a spade a spade. Instead, it would be called


A one-person-operated, manually-controlled, foot-powered implement of simple and robust yet adequately efficacious ligno-metallic composition designated primarily though by no means exclusively for utilization on the part of hourly-paid operatives deployed in the agricultural, horticultural, or constructional trades or industries, as the case may be, for purposes of carrying out such excavational tasks or duties as may from time to time be designated by supervisory grades as being necessary, desirable, expedient, apposite, or germane with regard to the ongoing furtherance of the task or objective in hand or, on the other hand, underfoot, Secretary-General.


Only when you memorize the paragraph above and convince your ancestors to be hereditary peers, you can think about $100,000 speaking fees. :-)

The talk above was given in Melbourne. A similar talk in Minneapolis (October 2009) is available, too. 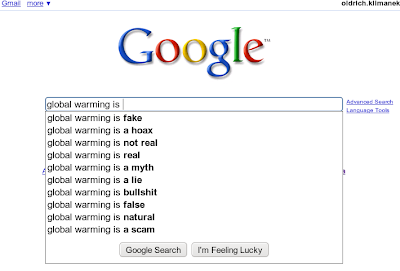 Reasonable thoughts are winning 9 to 1. ;-) Click to zoom in.