One India, BBC, and Science Now describe a meeting organized by Ralph Cicerone, the boss of the U.S. National Academy of Sciences, that discussed the "climate crisis", i.e. the leaked information showing that the climate science ceased to be an honest scientific disipline.

Note the amazing differences between the three stories.

Remotely related: John Coleman's second show about the AGW pseudoscience. Playlist: 50 minutes divided to 9 parts. Stars: Somerville, Watts, Christy, ... If he avoided ludicrous propositions such as that "the Himalayas cover one tenth of the Earth's surface" in the second part (it's 1/200), and if he learned what the word "deficient" meant at 5:40, eighth part :-), he would be an excellent popularizer of science.

While the Science Magazine ("Now" means "News") discusses the words of Gerald North who thinks that the IPCC doesn't deserve to be under attack and who wants new "coaches" who will teach the climate scientists new tricks how to "fight" (sorry, Gerald, but the climate scientists have already learned and used all the tricks - this game is over), One India and BBC focus on the main speaker, the NAS president.


Cicerone called for "transparency and integrity in science" and he explained that the IPCC's mistakes have damaged the prestige of all of science - not just the climate science that deserves it - and that the IPCC has "screwed up." He added, "the greater the stature of the institution, the harder the fall."

Well, if his hidden point was that the National Academy of Sciences under his leadership has been innocent during the years of elevated climate hysteria, something like 2005-2009, I would have serious trouble to accept his assertion. And even if his behavior were better and more honest than that of Pachauri, which is likely to be the case, I think it is an insane anachronistic artifact of the irrational years for the National Academy of Sciences to have a president from as un-prominent a discipline as atmospheric physics.

When the heads start to fall en masse, and we're not there yet, his should surely be among the falling ones.

P.S. I indicated that Science Now was biased, trying to hide the negative atmosphere that dominated the meeting. But that's nothing compared to Agence France-Presse. They chose Martin Rees' alarmist comments as the summary of the meeting (he's the current head of the Royal Society) and their rosy story was written under the headline: "Climate science alive and well despite scandals: scientists." Very nice and realistic.

Some media - e.g. some Czech newspapers - wrote about the "expanding deserts" etc. caused by "climate change". The hidden assumption is that the amount of precipitation goes down. Such statements reveal the complete absence of any knowledge about the basic numbers. Let's look e.g. at the data from Prague between 1900 and 2000. 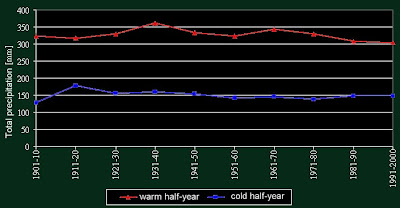 Click to zoom in. Total precipitation in Prague's Clementinum over cold and warm half-years, averaged over decades of the 20th century.

The graph above shows that there's been no detectable change of the total precipitation in Prague. In the warmer half-years, the precipitation has decreased by a few percent since 1900, in the cooler half-years, it has increased by a few percent. In both cases, the changes have been chaotic and they may be classified as noise. We may say that the total annual precipitation hasn't changed at all. And there exist no good reasons why it should be changing in the first place.

While the precipitation is more important for a regional climate to be hospitable than the temperature, it is simply not affected by human activity. I think that the media should stop with these direct lies. They're futile. Many people have learned to recheck the basic statements that they hear about the climate - the sources are simply no longer "uncritically trustworthy" - and one Google search is often enough to see that a newspaper article is a pack of lies.

Whoever looks at the precipitation data will see that there's no detectable trend. There's no detectable (especially not increasing) trend in "global weirding" (i.e. in the speed of changes and oscillations), either. I have shown some graphs showing this point, too. We could continue with many other quantities. The only quantity that may have changed by a little bit was the average temperature, T, but none of the statements that T also makes A,B,C,D change can be supported by the basic data because A,B,C,D haven't really been changing except for noise.

A great example of the A,B,C,D misconception was a two-minute "lecture on climatology" that Barack Obama gave to some supporters yesterday (on Friday):

Well, Barack, no. Increasing global average temperatures - even if they were increasing - don't mean any increase of variations, havoc, hurricanes, snow in Texas, or anything else you say. (And by the way, the temperature in Vancouver right now is slightly below the average once again.) The global warming might cause all these things in some parallel universes with different laws of physics, but it does not cause them in our world.

In our world, the greenhouse effect only causes a totally uniform - in time (both daily cycles and seasons) and space (except for a possible dependence of feedbacks on the latitude) incremental warming (a very small one for CO2, as we know), but it doesn't change any of the patterns or seasonal differences. The reason for the uniformity is not hard to see: the greenhouse effect is the absorption of the thermal radiation emitted by the Earth, and every piece of Earth at every time emits pretty much the same amount of thermal energy, given by "sigma.T^4" times the well-known multiplicative corrections, and the same percentage is being absorbed because the greenhouse gas (here: CO2) concentrations get uniform very quickly, too.

What you say could be added to your contributions concerned with the curvature of constitutional space. You have no idea about science and you should better close your mouth. You know, Barack, Harry Reid may be nodding at 1:21 when you say, with a serious face, that global warming causes huge snowstorms in Texas. But the people with elementary common sense - or scientific education - whose well-being doesn't depend on the promotion of false information can actually figure out that everything you say about the behavior of the climate is nonsense.
Luboš Motl v 5:24 PM
Share