NCDC UrbanGate: how the urban warming was exported to U.S. countryside

Edward Long, a retired NASA physicist, wrote a fascinating 14-page paper for SPPI that needs to be read and verified:


He looked at the NCDC surface temperature records of the 48 main U.S. states (you don't want me to spell "contiguous" right, do you?). If his work is valid, it is a shocker that actually reveals how the urban effects work and what a major team has done with them. 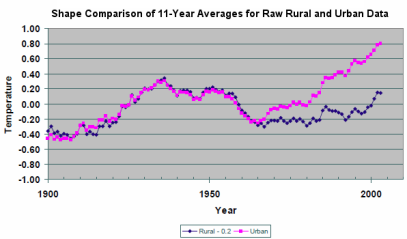 He took one rural and one urban station from each state among 48 of them. And let's hope he didn't cheat or cherry-pick.

This picture above, based on the raw data, shows the average rural temperatures and urban temperatures. They're almost perfectly aligned, except for a divergence that's been increasing since 1960 or so. If this graph is actually valid, it already shows you the urban effects. They became significant after the war and accumulated 0.6 °C of warming.

If you assume that 0.6 °C is the right urban contribution in Central Prague, which is exactly what I was assuming in my article about the Clementinum data, you will see that Prague has actually seen a modest cooling since 1800.

So this result, is valid, is amazing because it actually and cleanly shows how much the urban effects matter. It's equally important, but now for sociological considerations, to look at the "adjusted" data rather than the urban ones: 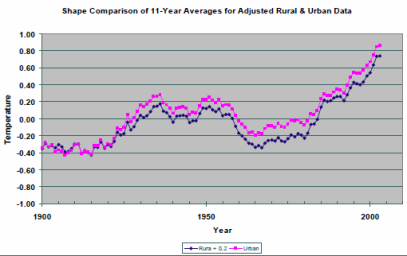 You can see that the adjusted data are made in such a way that the urban-rural difference largely disappears. But what's shocking is that the adjusted NCDC data are actually made to (approximately) agree with the urban, not rural raw station data! It means that the the urban effects were not eliminated. On the contrary, this urban warming has been added to the rural stations, too!

The "clean", purely natural rural figures have been contaminated by the bogus warming desired by the urban AGW believers.

This clearly needs to be verified because it's a potential bombshell. If he's right, the correct natural warming in the U.S. was around 0.1 °C per century, instead of 0.6 °C that follows from the "adjusted" NCDC (and probably also GISS) data, and this small 0.1 °C increment could be identified with the contribution of the growing rural population, too.

A special meta-meeting in Bali ended with very secret conclusions and decisions that were only revealed to the readers of The Telegraph, WUWT, and this blog.

The IPCC's "crisis of confidence" meant that they decided to investigate whether Pachauri's management had anything to do with all the problems. Pachauri proposed that this investigation would be done by one of his friends on his paycheck. This is how it work have worked in the past. However, the British, German, Norwegian, Algerian, and Antigua-Barbudan environment ministers disagreed and they plan to do a real independent investigation of the IPCC!

So another U.N. climate panel will be created to view the U.N. IPCC panel that reviews the climate.

The diagram of U.N. panels on climate change.

The ministers mostly didn't care whether there were lethal errors: they just disliked Pachauri's attacks on those who disagreed, e.g. the Indian report on the Himalayan glaciers. Too bad that they still don't care about the substance - just about the image.

As some outlets describe, Gore was invited to Apple shareholders' meeting. On behalf of the sane shareholders, Shelton Ehrlich of Palo Alto spoke against Gore's reelection.


Gore has become a laughingstock. The glaciers have not melted. If his advice he gives to Apple is as faulty as his views on the environment then he doesn't need to be re-elected.


But don't get me wrong, there are many green nuts among the Apple shareholders, too. ;-) Some of them proposed their "sustainability proposals". Two such proposals were rejected. Gore was re-elected, together with Jobs and everyone else.
Luboš Motl v 12:59 PM
Share