US: pika not endangered, SciAm: panic!

The Scientific American runs a story about a ruling by the U.S. Fish and Wildlife Service (FWS) that was released last week. The title is kind of incredible:


Denial of global warming threat to the American pika means no protection from U.S. 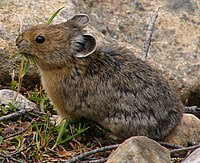 After one year of research, the official U.S. body for biodiversity decided that


After review of all available scientific and commercial information, we find that listing the American pika ... is not warranted at this time.


Well, most of the American pika actually belong to the "least concern" group, whopping three categories below the "endangered" group, while only 8 out of 31 populations are "vulnerable", one step below "endangered".

The petition to classify these small (170 g) cousins of the rabbit as an endangered species came from environmental advocacy groups. These green humans claimed that Pika dies when the temperature jumps to 25.5 degrees Celsius for a few hours. (The only existing reference seems to be a statement by an ABC journalist.) FWS found out that they can live at 40 degrees Celsius: there's just 14.5 degrees discrepancy between the two sources.

These little animals live in Oregon and Nevada. They may move by 3 kilometers to the North a year or 2 meters upslope a year (or some mixture of these two) if the slow changes to the temperatures continue (regardless of the cause) and if these changes pose a problem for them. That is enough to counter the 0.013 °C of warming a year that we have seen for 30 years.


A John Platt who wrote for Scientific American wants to turn his magazine into yet another environmentalist advocacy group (generously assuming that it hasn't happened yet) - and maybe someone else tells him to do so because we've seen quite a lot of this stinky stuff in Scientific American in recent years. His bias is kind of stunningly obvious. For example, he writes


Oh, so it must be "obvious" that the decision is wrong, right? It goes against the groups' doomsday propaganda, so it must surely be wrong. To assure the readers that he would immediately eat any excrement from the green pressure groups at any moment, the author of the article uncritically parrots every piece of information they offer even when it's incompatible with the official knowledge.

For example, how many subspecies are there? This is seemingly an apolitical question. The official answer by the U.S. agency is that there are five subspecies. Mr or Mrs John Platt (I don't want to insult him or her if he or she underwent a sex-changing surgery which similar people often do) knows that the official number is five but he or she completely and instantly dismisses it and while expressing no doubts, he or she replaces it with a number thirty-six taken from the pressure groups:


The American pika lives on cold mountain peaks in the U.S., where the 36 pika subspecies have adapted for a very specific environment and temperature range.
...

(The FWS also disagrees as to the number of pika subspecies, saying its review identified just five subspecies.)


Well, I didn't really know how many subspecies there were but the official U.S. biodiversity body has studied this problem for one year, while having access to all the partial information from the green groups and others, so why would one assume that their answer is less correct than the older answer by the green groups? Wikipedia seems to agree with FWS:


Because evolution is a gradual process, there's no God-given way to count the subspecies, anyway. It always depends on official conventions.

However, after some Internet searches, your humble correspondent is actually able to tell you the complete up-to-date answer to the "counting of subspecies" story and it is pretty amusing - or worrisome, depending on your viewpoint. Just look at WildLifeInformation.ORG. You will learn that the current classification - valid since 2005 - respects the five subspecies "groups" listed above, so FWS is right and SciAm and the green groups are wrong. But it's amusing to look where the number above 30 came from.

The page I just mentioned enumerates "formerly recognized subspecies" and there were 31 of them (from albata to wasatchensis) in this obsolete classification: another one, the 32nd (Ochotona Collaris), was shown to be a separate species by craniometric data (about bones). So where could the green groups' number 36 come from? Well, note that 31+5 = 36. And it's not an accident. :-)

So can you add those 31 old subspecies to the 5 new groups? Of course, you can't because the 31 old subspecies are just subsets of the five new groups. For example, "albata" belongs under the "schisticeps" group, as WildLifeInformation.ORG clearly explains in all cases. The green group "biologists" are doing the same mistake as if you add the number of continents with the number of countries and you claim that the result is the number of lands. They're incompetent (let's admit, the IUCN Red List does the same mistake) and Scientific American uncritically parrots them because too much extra-lousy, activist journalistic stuff is being employed by the formerly fine magazine today.

Incidentally, the modern classification to the new groups is superior because it actually looks at the genetics and morphology of the animals and doesn't establish many "distinct subspecies" just because they live in different counties. ;-)

FWS allows all people to submit new information about the pika subspecies which is sensible because science is never quite settled and the conditions may be changing, too. And John Platt gives his or her incredible reply which is the punch line of his or her article:


Why should "we" hope that new information comes quickly enough? And why does Mr or Mrs Platt seem to assume that the new information will say that they're all gonna die (which he hopes to be the case)?

Unfortunately, no one has cared about another endangered species - impartial science journalists in Scientific American who actually have a brain in their skulls. They're already gone.