Warming by 20 °C in Vancouver

I was checking whether January 2010 was the warmest ever January in Vancouver, as you can read in some news outlets. Using the WeatherData function in Mathematica, the answer is No. For example, the average temperature on the airport was 7.8 °C in January 1994 but only 7.63 °C in January 2010. So as far as I can say, the media are not telling us the truth. 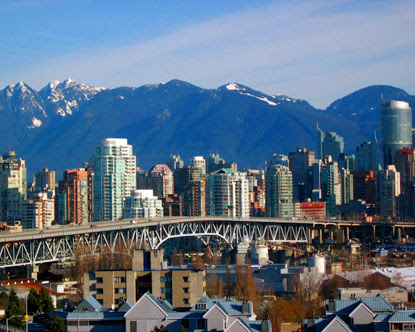 But I was intrigued by a supercool January 2003 which was apparently 20 °C cooler than most other Januaries. I immediately decided it had to be a bug. The WeatherData bug is shared by Wolfram Alpha. If you ask Wolfram Alpha about the temperature in Vancouver in February 2003, you get the following cute graph:

The temperature suddenly jumped by 20 °C. Similarly, you will find a 20 °C drop in December 2002. It's really not hard to become sure that the discontinuities are errors. Just look at Bellingham, WA, which is just 76 km away. You won't find any discontinuities in February 2003.

My cherished contact at Wolfram wrote me that I should trust the temperatures - they really jumped by 20 °C in a few hours, probably because of a "major warm front" - because the data were taken directly from the weather station and because some nearby stations show the same behavior. No kidding. ;-) I hope that he has gotten sane since that time but I still have no proof of it.


Of course, it wasn't hard to find out what was the cause of the mistake - which may be repeated at many other places of the WeatherData database. (This error could be easily looked for systematically.)

It was a simple Fahrenheit-Celsius confusion. The actual temperature was around +5 °C. It was incorrectly interpreted as +5 °F, which is around -15 °C, which is what you see in the bogus graph. Also, the fluctuations during the "ice age" are suppressed by a factor of two - well, 1.8, as you know very well.

So the Al Gore Rhythm producing the error is known. What is not known yet is who is actually responsible for this error.

As Roger Pielke Sr analyzes, climate skeptic Henk Tennekes resigned from the Dutch Academy of Sciences. The current president of the Academy, string theorist Robbert Dijkgraaf, had to deal with this case, and he did so diplomatically and bureaucratically - without having said anything nontrivial.

My impressions are mixed.

Henk Tennekes is certainly bothered by many of the same things as your humble correspondent. However, a big portion of his complaints is the fact that physics is treated as the umbrella of all natural sciences. Well, it simply is. That's how the world - and causal relationships between various disciplines - work. Physics is the most fundamental natural science and others are its special examples and approximations for more specific situations.
Luboš Motl v 10:36 PM
Share