Originally posted on March 29th. Put on top as the most discussed recent article.

Let me show you another simple way to see that the climate sensitivity can't really be close to the IPCC's mean value (and certainly not close to the upper end of their interval).

A black body minimizes the reflection which is why it maximizes thermal emission at the same wavelength (heat it to 6000 K first). The emissivity may only be reduced - by a light coating or by an atmosphere with a greenhouse gas - but it can't be increased.

The reason I will be able to show that the IPCC figure contradicts the basic laws of physics is that we will look how the relevant theories behave at somewhat more extreme temperatures which are nevertheless physically possible - and not too extreme. We will see that the IPCC estimates require a behavior that contradicts some universal laws of Nature - namely the fact that the emissivity can't exceed one.


The climate sensitivity parameter, λ (pronounce "lambda"), is more general and isn't necessarily connected with CO2. It is the change of the near-surface air temperature, ΔT, that you obtain from a unit change of the radiative forcing, RF - which is the net irradiance measured at the tropopause (the boundary between troposphere and stratosphere, i.e. the upper boundary of the atmosphere where "weather occurs"):

The idea is that if you add some extra incoming energy through the troposphere (e.g. increased solar energy), or if you remove some outgoing energy, the Earth will find a new, warmer equilibrium. And the ratio between the warming that you get after the system gets stabilized and the forcing - in W/m^2 - is the climate sensitivity parameter.

The terminology, "climate sensitivity parameter", is borrowed from the 2007 IPCC report and I hope you will forgive me this linguistic choice. I will not use the actual scientific content because it is unusable, as we will see.

Now, let's think how the Earth would behave if you tested its behavior in much cooler temperatures - between 0 K (-273.15 °C) and the current global mean temperature, 288 K (15 °C). The climatologists rarely test their ideas in these more extreme conditions - which prevents them from seeing that their assumptions are physically stretched if not impossible.

But physicists like to be sure that their theories don't predict inconsistent phenomena. So I will assume that the dear reader believes me that the minimal temperature of "normal objects" that can be achieved is close to 0 K or -273.15 °C. That's the temperature at which the thermal radiation goes away.

We will ask a fundamental question: change the total incoming energy per unit area that crosses the tropopause, with the photons that get scattered and reflected not being counted, from 0 W/m^2 to the current value of 235 W/m^2. Alternatively, this figure may be viewed as the total outgoing thermal radiation of the Earth. The total average energy coming from the Sun is 342 W/m^2 but 107 W/m^2 is scattered and/or reflected so only 235 W/m^2 is captured and "transformed" by the Earth: these 235 W/m^2 are re-emitted as the thermal infrared radiation.

We want to know how the near-surface global mean temperature is being changed as a function of the energy flow. Everyone should know what the behavior of the black body is: the total emitted energy is proportional to the fourth power of the absolute temperature (in Kelvin degrees).

OK? How can you find out the "slope" of the curve at the real temperature around 288 K? Well, just differentiate the equation above:

You may invert the ratio to find that


Note that the temperature differences of 1 K and 1 °C are the same. So 0.3 - with the right units - is the black body estimate for the climate sensitivity parameter. The IPCC mean value is something like 0.8, almost thrice as large.

The feedback-free value of the radiative forcing from a doubled CO2 is 3.7 W/m^2 and it is calculable. If you multiply it by 0.3, you get 1.1 °C. That's almost exactly equal to 1.2 °C, the no-feedback climate sensitivity!

Now, we're gonna check how several graphs look like. This is the graph of the fourth power. 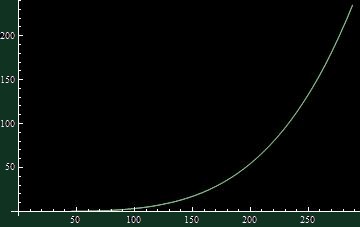 The radiation emitted by cool object is really small.

If you want to get to the IPCC value of the climate sensitivity parameter which is about 3 times higher than the black body value, you will have to change the slope of the curve at the right upper corner. The simplest function that can do the job is another power law: but the exponent has to be 1.3 instead of 4. 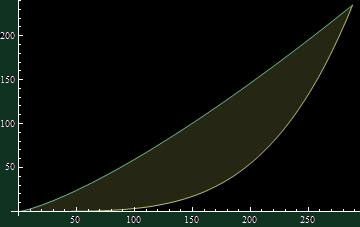 The black-body curve is the lower boundary of the khaki region; the curve matching the IPCC slope is the upper boundary which is nearly flat. Can you spot the difference?

First, let us see that the particular simple power law above - with the exponent being 1.3 - is absurd. For example, when the temperature is those 144 K i.e. -129 °C, the black-body-like i.e. fourth-power-law value of the energy flows gave us about 15 W/m^2.

The answer is a resounding No. But we must be a little bit more careful about the black bodies.

So far, I have been using the term "black body" for any object that respects the fourth power, Stefan-Boltzmann relationship between the temperature and the emitted thermal energy. However, the overall coefficient didn't have the proper black-body value.

If you apply the Stefan-Boltzmann law to the temperatures we mention, you obtain:


You see that these energy flows are less than twice larger than the "black-body" figures we had derived from the known figures at 288 K and from the extrapolation by the fourth power.

However, at -129 °C, the exact black-body radiation produces 24 W/m^2. This is actually the ultimate upper limit of the thermal energy radiated by a -129 °C object because the emissivity can never exceed one!

I should explain some insights about the physics of radiation by non-black bodies. The general bodies at temperature T emit less than the black body.

The ratio (real radiation over the black body one), called the emissivity, turns out to be exactly equal to the absorptivity - the percentage of electromagnetic radiation absorbed at a given temperature, angle, and wavelength. This equality is called the Kirchhoff's law of thermal radiation and has already been known since the years of classical physics, namely from 1859. It follows from the detailed balance - a kind of properly calculated time-reversal symmetry (symmetry of the microscopic laws between the past and the future) applied to the radiation phenomena - and from the equilibrium.

This discrepancy is huge, indeed. I went to 144 K i.e. -129 °C because the numbers were simpler: the absolute temperature was reduce to 1/2 of the current value. However, there's nothing wrong about these temperatures. After all, most of the atmosphere is composed of nitrogen. Its boiling point is 77 K i.e. -196 °C: so even at those 144 K, there would be a similar atmosphere to ours, a gassy one.

However, the discrepancy between the IPCC value and the basic laws of physics was so huge that it should be obvious to you that I didn't really have to go to -129 °C. So let's add one more curve to our graph: the exact black-body curve that defines the upper limit of thermal emissivity. 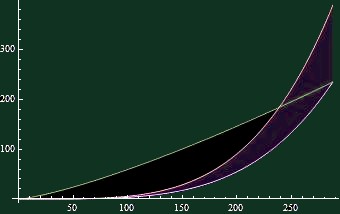 Because emissivity can't be greater than one, the whole black region in the middle of the graph - and anything above the upper boundary of the purple region - is actually impossible. Because I have already drawn a couple of graphs, it's useful to mention the Mathematica code for the graph above so that you can check what I am doing:

If you calculate where the forbidden black region starts (I mean its corner on the right, warmer side), it's at 239 K i.e. -34 °C. That's a pretty imaginable temperature! In fact, The Catlin Arctic Survey had to work in the wind chill of -50 °C today, another heat wave (well-known for them by now) that was apparently caused by global warming. ;-)

The challenge for the IPCC is simple: try to determine the amount of thermal radiation by the Earth when the global mean temperature drops to -34 °C (imagine a thought experiment in which the Earth is moved slightly away from the Sun). Or try to draw the whole function that should replace the grey body of mine.

Needless to say, the problem becomes even worse when you try to get the climate sensitivity around 4 or 5 °C. The IPCC's "flat line" actually becomes inverse U-shaped. It will be even more horizontal in the physical region and it will be even harder for the IPCC curve to stay within the allowed purple strip.

Is there any conceivable way to defend the possibility of a higher climate sensitivity comparable to the IPCC mean value against my new devastating argument?

Clearly, in order to keep the high sensitivity, the "flat line" in the graph above has to keep the same slope on the right side of the picture because this slope is what defines the climate sensitivity parameter. However, at the same moment, as you reduce the temperature, you must keep the curve within the purple region. As you're going to the left, you must brutally bend the curve to the bottom. Can such a resulting curve be defensible or even realistic?

I don't think so.

So when you get to the global mean temperature being something like 239 K i.e. -34 °C, the slope of your curve already has to agree with the slope of the "exact black body". What is this slope? Well, it's again close to 0.3 °C / (W/m^2), the very same value of the climate sensitivity parameter I assumed to be correct everywhere, anyway.

So the realistic "gray body" estimate claims that the climate sensitivity parameter is 0.3 °C / (W/m^2) at the current temperature of 288 K. It's actually higher at lower temperatures. At the beginning, we calculated "d T / d RF" and it goes like "1/T^3". So at 239 K, the climate sensitivity parameter calculated from the realistic black-body-like fourth power is

So at 239 K, the climate sensitivity parameter should actually be 1.75 times greater than what it is at 288 K.

Something that dictates how the Earth's thermal-radiative behavior deviates from the very fourth law dictated by the black body - and universal dimensional analysis - has to brutally change in this modest interval.

Yes, I think that the probability of something like that occurring to the laws of physics in this "mundane" interval of temperatures is extremely tiny. For the climate sensitivity parameter to "speed up" in this brutal way around 15 °C, the required effects would probably have to be linked to the freezing of ice.

However, -34 °C is not too far from the freezing point, either. So it's hard to believe why this "acceleration" of the climate sensitivity parameter by a factor of 4.55 should affect the Earth near 15 °C but not near -34 °C (global mean temperatures). Moreover, only a tiny fraction of the Earth remains frozen - or covered by snow. So if the hypothetical acceleration were linked to some kind of ice-albedo effect, such an effect couldn't really influence most of the Earth's surface.

My argument above can also be reverted and used as an argument against too low a sensitivity. The only major change I would have to do is to study the temperature above 15 °C rather than below 15 °C.

For example, if you wanted to believe that the climate sensitivity parameter is 0.15 °C / (W/m^2), one half of the value calculated from the fourth law, something needed to give you 0.5 °C of the climate sensitivity, you would need something like the 8th power instead of the 1.3th power we used for the IPCC guess. And this power would exceed the tolerated exact black-body limit on the emissivity near 327 K i.e. 54 °C as well as higher temperatures. A pretty dramatic "fudge factor" changing the behavior from 15 °C to 54 °C would also be needed.

That's also pretty bad, I think. I don't think that the Earth's behavior "qualitatively changes" between 15 °C and 54 °C.