Gliese 710: a star colliding with the Sun

Well, the title is a little bit more dramatic than the reality. ;-) The basic story is easy to explain. 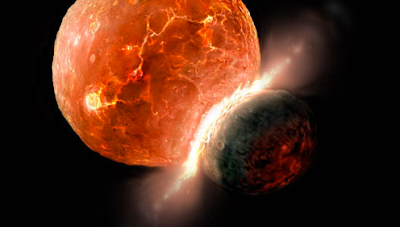 There probably exists the so-called Oort Cloud surrounding the Solar System. It is located in a spherical shell which is about 1 light year (50,000 AU) away from the Sun and it contains billions of frozen comments if not comets (sorry, I can't exterminate such a funny typo).

Note that I always prefer to avoid the unit of 1 parsec which is about 3.26 light years because this unit is too linked to astronomy and too abstract for a physicist.

The Kuiper belt is 1,000 times smaller than the Oort Cloud in radius. It contains Pluto and two other dwarf planets as well as lots of water, ammonia, and methane.

The other player is Gliese 710, an orange dwarf star with 0.5 solar masses (plus minus 20%), currently located in the Serpentarius constellation. As a recent

The probability that the alien star visits a vicinity of the Kuiper belt - so that it could disrupt the belt (i.e. that it will be seen about 1,000 AU away from the Sun or closer) - is around 1 in 10,000. It's easy to estimate such things by considering the "cross sections": the probability goes like the second power of the typical distances that you want to hit.


Of course, the probability that it could visibly disrupt the Earth's orbit directly is much smaller - 1 in 1 billion or so.

However, even the "almost guaranteed" encounter with the Oort Cloud could send lots of new comets to the Solar System. And they could influence the Earth, too. While it seems likely that most Earth-like planets avoid such encounters during their mother stars' lifetimes, such interactions are not quite excluded.

By the way, Don Korycansky of UC Santa Cruz and Catherine Plesko of Los Alamos claim that we can't neutralize asteroids bigger than 1 kilometer or so in the Terminator style: 2-18 hours after a nuclear explosion, the pieces would recombine into one rock again.
Luboš Motl v 5:38 PM
Share