The people who say that global warming alarmism is a serious mental problem or a social pathology that should be treated on par with violent pedophilia or the Islamic terrorism got a new powerful argument.


So quite logically, they decided to commit suicide: it's very hard to cure this disease - if you really catch it and if you really believe that a climate doomsday is looming. They did all these things a week ago or so, around early Sunday morning. The motivation for their decision was explained in their suicide note which also complained that their government didn't "act". I would have nothing against their decision for a double suicide: it's their freedom to do it. And many readers of Prison Planet actually recommend Al Gore et al. the same method to fight against the AGW fears. 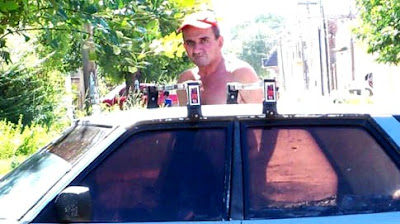 However, what I find absolutely unacceptable is that they decided to "transmit" their belief in AGW onto their kids, too. In this case, the "conversion" was particularly brutal. Their son Francisco (2) may have grown into a healthy and sane skeptic but he died as soon as he was hit in the back. A survivor: will she become an AGW believer once she's older and they tell her, on a nice and sunny day in the future, what happened with her family?

However, the daughter (7 months) was both lucky and clever. And she survived. After the proponents of the man-made climate change consensus shot her in the chest and missed her vital organs, she instantly pretended to be dead. The parents were satisfied with her looks so they shot themselves before they could really hurt the innocent girl. She had to survive for three more days before the scene was discovered on Wednesday or Thursday by the neighbors (because it smelled terribly), with the girl swimming in blood and gore.

The father, nicknamed "Franchi", inherited lots of real estate from a wealthy family in Esquina, including a farm, villas, houses, and land (where they built a racetrack later), when he was young. He was also a parapsychological healer.

However, the location of the gun - a .38 revolver - suggests that the lady was the shooter in all four cases: more contrived logistics could mean that the shooter was (mostly?) the man, as many people expect (without no good reason).

But if someone is a radical leftist such as Amy Bishop or an obsessed climate alarmist such as these two parents, the likelihood is simply much higher. People who really believe that global warming leads us to a doomsday should be treated as mentally ill. The society should try to help them - and the rest of us.

Global warming has become a cult in some corners...

So I think it's pretty unlikely that any particular alarmist we know of is going to shoot some of us. But I am not sure, either. There's surely a risk here. If someone believes that the world is gonna die soon, he or she (or both) simply doesn't have too much respect for the value of human lives - especially the human lives of those who want to live after the doomsday.

Moreover, I think that many of these AGW types have been getting increasingly more radical since November 2009 when the global warming farrago began to collapse. Responsible people in various agencies should start to think about these matters.
Luboš Motl v 2:20 PM
Share