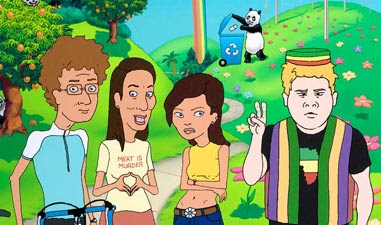 These guys were surely an exception.

The Guardian and others have published a story about the ethics of the "green consumers":


How going green may make you mean

The subtitle says that "Ethical consumers less likely to be kind and more likely to steal, study finds."

The study was just published at Psychological Science:

Nina Mazar and Chen-Bo Zhong of Toronto have found out that people wearing the "halo of green consumerism" are less likely to be kind to others and more likely to cheat and steal. After a randomly chosen subset of the 90 undergraduate students (paid $5 for the experiment) became "green" by having bought green products, they became far less ethical. The researchers were surprised by the findings: at least one of them describes herself as a green consumer. The likely mechanism explaining the data is known as "moral balancing" or "compensatory ethics".

As Dieter Frey, a social psychologist at the University of Munich, said, the findings fitted patterns of human behaviour: "At the moment in which you have proven your credentials in a particular area, you tend to allow yourself to stray elsewhere."


The researchers used a computer game allowing people to make a profit by cheating i.e. making a trick and by hiding the decline of the money inside the game i.e. by lying about it, a combination that is referred to "stealing". The green consumers were six times more likely to steal than the proper consumers - a huge signal (they calculate a 99.9% confidence level that the difference couldn't be due to chance). The green individuals also didn't want to share money with others.

The Guardian mentions Al Gore - and his lies about the electricity bills - as the ultimate template for the unethical human scum. No specific proposal how to protect the society against the green types has been articulated yet.
Luboš Motl v 6:55 AM
Share