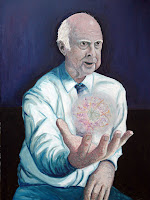 In 2007, Thomas Schücker wrote an amusing simple preprint that collects dozens of predictions for the Higgs boson masses:

Well, I think that there are so many comparably likely models - most of which contain continuous parameters whose values aren't calculable right now - that the whole interval is covered almost uniformly. But yes, I do think it's more likely than not that the Higgs boson mass is between 114 GeV and 130 GeV.


Once the Higgs is discovered, which may take a year or years, you can check whether the mass helps you to find the very right model. However, I doubt that the right one actually appears in this "yellow book" which has been compiled in a somewhat chaotic fashion. ;-)

Of course, most of the models that are included are supersymmetric which is good but it's far from enough for them to be right.
Luboš Motl v 7:32 AM
Share