BBC, Science News, and others promote an interesting paper by A.D. O'Connell and 12 co-authors (including Prof Andrew Cleland) from UC Santa Barbara that was just published in Nature, 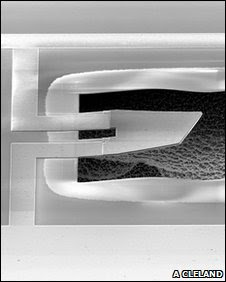 The largest objects that have been put into quantum linear superpositions so far would have at most 60 atoms. The team above has increased the number to trillions.

A quantum piezoelectric resonator - an aluminum nitride film between two aluminum electrodes - that is visible by the TRF readers' naked eyes (the width of the picture on the left is almost 0.1 mm) was cooled to its ground state and some electric circuitry was used to switch the system to the first excited state. This 2-state quantum system could have been put to general superpositions of states.

They could do this job by a pretty cheap "fridge" - giving them 20 nanokelvins or so - because they chose a "stiff" resonator with a high frequency, 6 GHz, which also means a high energy of the energy quantum (a relatively big gap between the ground state and the first excited state).


That's of course a big fun but the idea that this setup is qualitatively new as a setup in physics is a misunderstanding of quantum mechanics. After all, if you construct 2-state systems out of a single elementary particle or two of them, you should also realize that this 2-state system is a subspace of a Hilbert space with (almost infinitely) many degrees of freedom, a quantum field, most of which are frozen down to the ground state, just like in this case.

It really doesn't matter that the frozen degrees of freedom are modes of a quantum field or the degrees of freedom of trillions of dull frozen molecules. Mathematically, it's the same thing because the accessible Hilbert spaces are isomorphic. It has yet to be seen whether these "big" 2-state systems may be helpful as a new, more practical approach to quantum computing: it's conceivable (which would be fascinating) but I don't think it's a self-evident fact. Big components of a quantum computer could make certain things easier but "big" chips have big disadvantages, too. So far, the vibrations of the resonator are also too short-lived.

There are some misleading things that the BBC and the co-authors of the paper are saying about the setup and especially about quantum mechanics. For example, the picture above is presented as a "quantum resonator that can be seen by a naked eye". If and when we can actually look at something, the photons are constantly measuring the object and I would guess that such an observation is always enough for the decoherence to proceed almost instantly - assuming that you can actually see, at least vaguely, how the resonator is affected by the excitation. In other words, it's hard to look at it while keeping the temperature at 20 nanokelvin - light is pretty warm. ;-)

So quite generally, if you want the superpositions to survive and quantum mechanics to continue to hold in its pure form, you should better not look at the object. Andrew Cleland also says:


There is this question of where the dividing line is between the quantum world and the classical world we know.

We know perfectly well that things are not in two places at the same time in our everyday experience, but this fundamental theory of physics says that they can be.

This is a misunderstanding of the relationship between classical physics and quantum mechanics. Where is the dividing line between the two worlds? Well, there's no such line in our world. The whole world, including microscopic as well as macroscopic objects in it, is fully a subject to the rules of quantum mechanics. There are no exceptions.

Classical physics and classical intuition is useful in many situations - especially for systems with many degrees of freedom for which many states are available etc. But quantum mechanics never ceases to hold. In the same way, classical physics is never accurate: it's always just an approximation. This approximation ceases to be a good one when one looks at sufficiently microscopic or sufficiently fine questions. Obviously, 2-state quantum systems always mean that classical intuition is unusable.

After all, the very composition of matter of atoms would be impossible without quantum mechanics. So you may say that the existence of matter that doesn't collapse - with its atoms - is already a demonstration of quantum mechanics in the macroscopic context.

Decoherence and its speed determines when the quantum notions of probabilities - which interfere etc. - can be replaced by the classical notion of probabilities - which don't interfere. But this boundary doesn't mark any breakdown of quantum mechanics: quantum mechanics always holds. It only determines the point at which the quantum interference - the information about the relative phases of individual states - becomes practically undetectable.

Also, Cleland's proposition tries to claim that the physicists don't know where the boundary between the classical and quantum world - the line induced by decoherence - sits. He doesn't say so explicitly but he surely wants the readers to think that it is not known. But of course, this boundary is calculable - and has been calculable for decades. If you know the structure of a resonator, the temperature and the amount of noise of various kinds in the environment, you may calculate how quickly the decoherence takes place.

Obviously, for low enough temperatures, even systems with quadrillions of particles may be kept coherent. So while the paper is interesting, it still seems to me that most of the promotion of the work is based on anti-quantum zeal which is unfortunate. Quantum mechanics is not a Cinderella who only rules for tiny particles and who has to be defended against frantic new attacks in every new context we investigate. Since its birth in the mid 1920s, quantum mechanics has been the right theory describing the whole world.