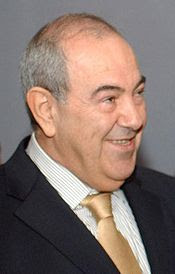 Count me as an Iyad Allawi fan.

It seems that he has won the Iraqi elections - by a few thousand votes - and the central committee has rejected al-Maliki's requests for a recount.

I am convinced that if I were an Iraqi, I would be his voter. He is a guy with some international experience - yet he is clearly a patriot who seems proud about his funny accent in English, too. ;-)

A Shiite who is popular among the Sunnis because he wants to create a secular, non-sectarian Iraq, Allawi can boast some extraordinary courage from his bloody encounters with his ex-ally Saddam Hussain. Neurobiologist Allawi surely brings something from a modern hi-tech world to Iraq that I can identify with - a pleasant change in the exotic Arab world that tends to scare me (at least away from the tourist centers near beaches).


The media are no longer hysterically trying to paint the situation in Iraq as a disaster - because such mostly fabricated news no longer hurt George Bush. So once again, we're free to say that Iraq is getting much better. Just to remind you, the GDP per capita in 2003 was something like $500. It's $3,700 or so these days.

Allawi has always realized the genuine potential that a country like his own has under a sensible leadership. That's why he has thanked America for the liberation from Hussain and other services. After all, the Pentagon money spent in Iraq were a kind of investment into his homeland - an investment that will start to return once the newly acquired freedom is (almost) fully appreciated.
Luboš Motl v 10:07 PM
Share