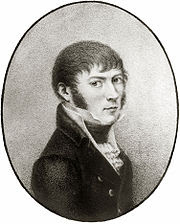 His childhood was pretty difficult. When he reached the M-theoretical age of 11, he became an orphan. He had to work as an assistant to a harsh glassmaker. That was the better part of the story. However, in 1801, when he was 24, the workshop collapsed and Joseph was buried in the rubble.

How can this fairy-tale continue?

Yes, fortunately, an elected prince (who would later become Maximilian I Joseph) was riding his horse nearby the workshop. He noticed the rubble, instructed his staff to save Joseph the assistant, and forced his employer to buy books to him and to allow him to study.

After less than a year, Joseph could go to a secularized monastery. He would become one of the world's top glassmakers - who helped to move the headquarters of this occupation from England to Bavaria. Glimpses of this leadership also spread to the German-speaking regions of Bohemia. In 1822, he received an honorary doctorate, much like Al Gore. In 1824, he became a noble and an honorary citizen of Munich. He died in 1826 at age of 39. It was normal for glassmakers to be poisoned by the heavy metal vapors. He took his best glass recipes to the grave with him.

However, why this story is interesting is that von Fraunhofer would become the main forefather of spectroscopy. He invented the diffraction grating that would upgrade spectroscopy from a qualitative art to a quantitative science. Previously, in 1814, he invented the spectroscope and found the 574 dark lines - the Fraunhofer lines - in the solar spectrum. 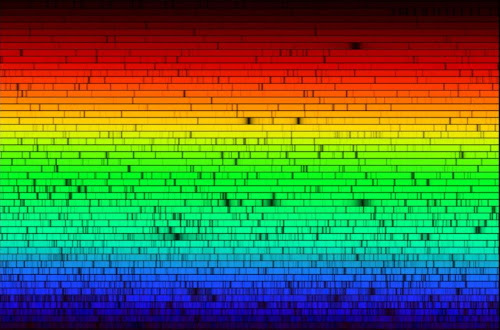 Why? Because in 1842, long after Fraunhofer died, philosopher Auguste Comte said that celestial chemistry was not even wrong. It was untestable blah blah blah. Just watch how similar his statement wa to the claims by the anti-physics kibitzers who filled the media in 2006:


To attain a true idea of the nature and composition of this science [astronomy], it is indispensable... to mark the boundaries of the positive knowledge that we are able to gain of the stars.... We can never by any means investigate their chemical composition.

Can we? This arrogant statement was said 28 years after Fraunhofer saw the spectral lines in the Sun's spectrum.

But let's admit: Fraunhofer didn't know the right explanation. He was too young and he had too little time. The correct explanation was only found by Kirchhoff and Bunsen in 1859, two years after Comte's death. They realized that they were atomic absorption lines. Some of the lines stem from the absorption in the outer shells of the Sun; others result from the absorption by the Earth's atmosphere (e.g. oxygen).


At any rate, the data needed to crack the Sun's spectroscopy - and chemistry - have been pretty much available since 1814. I don't quite understand what the physicists were doing with this insight about the light between 1814 and 1859. Are we also delaying some "obvious" discoveries by 45 years these days?

I just want you to look at the complicated colorful picture with the Fraunhofer lines. They contain a huge amount of information, don't they? Since the birth of quantum mechanics, we can really calculate all this information - about the position (energy eigenvalues), width, and intensity of the lines - from the first principles. Or at least using a much smaller information about the concentration of elements in the Sun's and Earth's atmospheres.

One more thing is named after Fraunhofer: the Fraunhofer Institute in Germany. Yesterday, they introduced the most fascinating 3D displays that require no glasses (and where you can still move). Using cylindrical lenses, the pair of images is copied to many vertical places around the screen.
Luboš Motl v 5:50 PM
Share