The Webcast (click!) began in the morning but it has already ended. Five "TV programs", main and 4 detectors, were available.


Shortly after 8:00 am, new injection of particles began. At 8:30 am, boring speeches by a guy followed. At 8:40 am, energy ramp up to 3.5 TeV started: it takes 30-40 minutes (2 GeV per second or so). The beams disappeared around 8:50 am again (cryogenics problem: magnet protection system caused a quench; correction: the problem was actually due to a magnetic coupling between the SPS main circuit and the LHC). But the actual collisions - and the destruction of the Earth :-) - will begin around 1:00 pm - the delay is because of the lost beams. 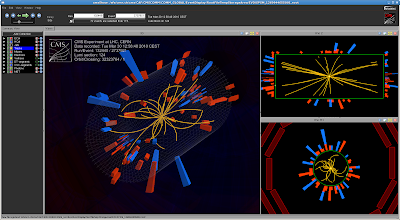 This plan worked! Collisions began at 1:06 pm, with stable beams colliding routinely since 1:20 pm or so: press release. The first black hole produced at 12:58:48 pm (see the picture above) was bought by Muammar al-Gaddafi who will use it to erase Switzerland off the map. (This comment of mine was silly enough so that it was retweeted by about 5 other friendly folks.)

Today, the LHC has collected the data from about half a million 7 TeV collisions.

This is just a tiny reminder that you may want to watch the news on Tuesday. And by the way, I am testing twitterfeed.com - will it send the TRF articles to Twitter? And how will the tweets look like?

LHC news from March 23rd when this posting was approximately posted for the first time.
Luboš Motl v 8:30 AM
Share