The Times write about a meeting at the Royal Society last week (or somewhat earlier?). Several famous scholars, including string theorist Michael Green, came to listen what others had to say. 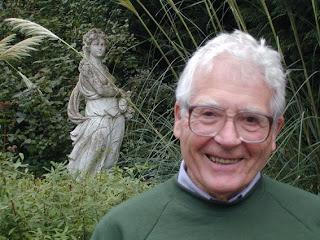 James Lovelock may have said the most interesting stuff. Recall that he is the father of Gaia theory, the idea that the biosphere of the Earth actively conspires to keep the Earth more hospitable for life.

And may I tell you something? I actually think that statistically speaking, this is the case. The individual organisms are trying to do things that are good for them. In most cases, they do just a short-sighted planning. But in a few cases, they're able to detect what's indirectly good for life, and support the changes in the environment that indirectly lead to this outcome. In effect, this has similar consequences as the idea that the biosphere is one super-organism.


While I think that this "super-macroscopic" aspect of the dynamics is far less important than the individual lives of the organisms, it seems to me that there exist both theoretical and experimental evidence that the Gaia negative feedbacks exist.

Because Gaia has been viewed as the ultimate template of the green religion, you may be surprised to hear that Her father, James Lovelock, actually doesn't like the idea of environmental science as a religion. Well, you should distinguish the opinions attributed to him from the real ones. In particular, he has praised the climate skeptics who have kept us sane for the long years: they helped us to avoid the religious status of the climate science although we were very close to it. After all, it's clear that the environmentalist "angel" hasn't lived without a sin so their help was badly needed, Lovelock mentioned.

When asked about the 21st century climate, Lovelock answered that the warming could be between 1 °C and 2 °C which would be harmless. Don't get me wrong: he has also said some contradictory statements about the possible demise of the life on the Earth during his grandchildren's lifetime. Feel free to choose. And he even thinks that the IPCC may be underestimating the future sea level rise.

Besides the Gaia theory, Lovelock has developed an instrument to measure toxins in the penguins' fat. The same gadget was later used to measure freons in the atmosphere. Lovelock had actually thought that CFCs were harmless before the theory of their influence on the ozone layer became acceptable.

Instead of wind turbines and solar panels, Lovelock recommends Great Britain to build seawalls and nuclear power plants. And what is his recommendation to the people? Enjoy life while you can.
Luboš Motl v 8:23 AM
Share