As I wrote in December and January, Greenpeace CZ has been trying to find primitive tribes all over the world that would help Greenpeace CZ to harm the Czech energy industry by following the template envisioned by Michael Crichton in State of Fear.

In the book, eco-terrorist groups initiate lawsuits against industrial corporations based on claims of sunk islands due to global warming. To make their case stronger, they also engineer some artificial disasters themselves. Greenpeace CZ has brutally stolen Crichton's copyrights and started with this stunning unethical manipulation in the real world. 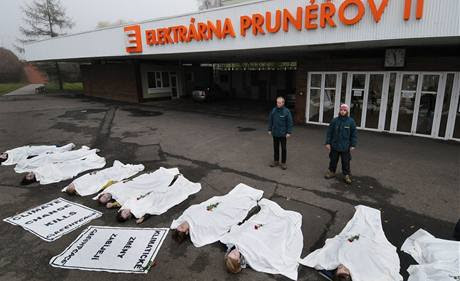 Climate change kills Greenpeace. Similar pictures convinced the Micronesian chieftains. Not sure whether the Greenpeace activists realize that they may deserve what they're training.

After dozens of failed attempts, Micronesia agreed to be guided by Greenpeace CZ which was a surprise even for the non-violent yet deeply obnoxious advocacy group itself. So Greenpeace CZ has prepared some dirty propaganda against the coal power plant in Prunéřov, sent them to Micronesia, and the Micronesia officials sent them back to the Czech ministry of environment.


The latter agreed to investigate the statements that the Czech power plants would raise the sea levels and sink the islands of Micronesia. ;-) So the minister and his allies chose an independent Norwegian panel that would try to find problems with the upgrade plans for Prunéřov.

Of course, if someone wants to look for problems, he will find them. The Czech media reported today that the Norwegian folks found out that ČEZ, the key Czech electric utility, is not planning to use the "best available technology" on the market.

Why the hell should it be using the "best available technology"? Every sane company has to decide - and has both the duty and the basic right to decide - about a trade-off between quality and price. Different companies choose different technologies. Clearly, the environmental standards in Norway are more strict because Norway is an extremely rich country and most of its citizens are mollycoddled sissies. Our GDP per capita (PPP) is $24,400 a year, slightly less than one-half of the Norwegian one ($53,000 a year) and it does make some difference when it comes to the luxury we require.

Also, the Norwegian report complains that the efficiency of some cleaning system, whatever it is, is only equal to 40% but they want it to be at least 42%. I have no idea where these numbers come from. I don't believe we have a law that says that it should be 42%. Just a decade or two ago, the figure would be vastly smaller, usually zero.

There are many places in Czechia which are much dirtier than Prunéřov, too. I guess Mittal Steel in Ostrava is one of them.

So Greenpeace CZ has pressured the Czech minister of environment, Jan Dusík ("John Nitrogen" of the Green Party - which won't get to the Parliament again), to stop the ČEZ's plans for the upgrade. Note that this intervention to the fate of the greatest conventional power plant in Czechia emerged because of accusations that the power plant would sink the islands of Micronesia by the greenhouse effect and rising sea levels (at most a few microns are added to the sea level by the power plant in the next 25 years).

It just happened that fifteen minutes ago, the Czech environment minister decided to step down. The press conference that is just getting started should have been about the power plant - but it will be dedicated to his resignation. So far, we can only speculate whether these two topics are linked.

The Green Party has previously "threatened" to remove its two men (Dusík and Kocáb, the rock musician whose resort are human rights) from the current technocratic government - because of the planned expansion of this coal plant, Temelín nuclear power plant, and the construction of small dams on the Elbe river. But at the end, they reconciled with Fischer's apolitical government.

Update: Yes, indeed, Dusík said that he resigned because he couldn't have decided about the fate of the coal power plant in Prunéřov. It looks like he was expecting that the Norwegian panel would okay the plans. But it just doesn't work in this way. ČEZ couldn't be directly legally constrained by Dusík's verdict - they're only obliged to satisfy "more local" regulators - but other parts of the government would be restricted by Dusík's "no" to the upgrade plans. At any rate, the situation would remain explosive and Dusík didn't want to "look" at the upgrade of Prunéřov.

While this story has gotten very far, it's still true that it's still (hopefully) not "trivial" to stop the upgrade of a power plant because of some ludicrous accusations involving Micronesia. The current prime minister supports the upgrade of the power plant and he was still more powerful than the green minister.

ČEZ, the Czech electric utility, is also a major private sponsor of science - together with other important companies such as Zentiva in the pharmaceutical sector (I was recently honored to be invited to give two talks about strings at two pharma universities in Czechia - nice folks). In a few years, ČEZ plans to spend CZK 5 billion (USD 250 million) for unspecified projects supporting science.

Bonus: IPCC checking who is Dijkgraaf

I just got a funny visit from ipcc.ch, click to zoom in: 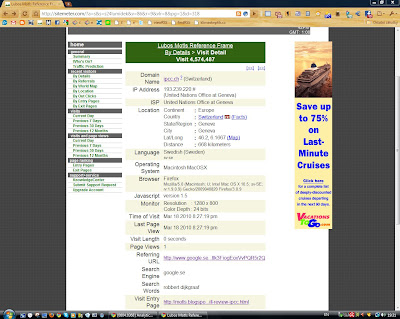 Robbert Dijkgraaf has probably been selected as the reviewer of the IPCC panel because of his previous positive comments about the "consensus". However, the visit above strengthens the notion that he is independent - he's not a part of the cabal - because otherwise the IPCC folks wouldn't be looking for the information about him.

This search led the IPCC guy to the article Dijkgraaf will review the IPCC.

The creators of viruses and phishing sites got inspired by Al Gore, the IPCC and others who have gotten very rich by promoting bogus warnings.

The most quickly growing sector of malicious software in 2009 and 2010 is the so-called scareware: see Google News and Wikipedia. In H1 of 2009, the increase of scareware was by 583%. Scareware convinces gullible users that there exists a new threat (a virus) and offers them a solution how to fight against this threat.

Of course, just like in the AGW case, there's no threat and the solution doesn't do a damn (positive) thing for you. However, the money they get from you are real. In many cases, they have your credit card number to be used repeatedly. Beware of scareware!

So Al Gore hasn't invented the Internet but he has invented a method how to get rich that also works on the Internet. Scare people, lie all the time, and offer them bogus solutions against the fear you created. Collect the money along the way.
Luboš Motl v 5:24 PM
Share