Willis Eschenbach has created a self-explanatory chart showing the traffic on climate blogs: 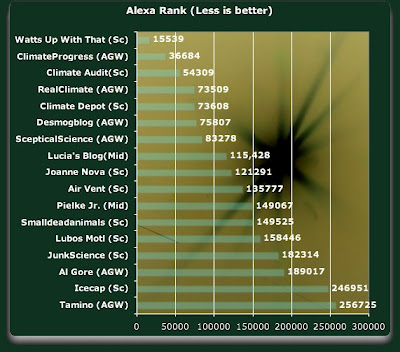 This chart was posted under an essay written by a guest blogger, Al Gore, on Anthony Watts' blog. You can see that WUWT is the most visited climate blog, ahead of Romm's blog, McIntyre's blog, RealClimate, Morano's portal, and DeSmogBlog.

The Reference Frame was sitting at the 13th spot, ahead of JunkScience, AlGore.COM, IceCap, and Tamino's blog. I didn't even know that Al Gore had a website: I thought he has just invented the Internet.


The comparison of the WUWT and Gore's traffic looks ridiculous - an elephant and an ant. If you don't know the relevant arithmetics, an ant is an alephant divided by the aleph, and all Aleph numbers are infinite. ;-) So it's better to choose two comparable players - Al Gore and your humble correspondent: 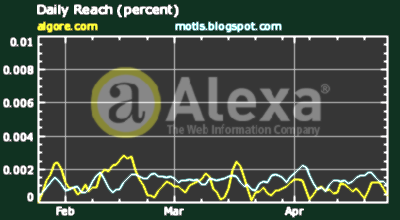 You see that we've been ahead of the alternative scientist throughout April but otherwise, this particular race seems to be neck and neck. You may see that Gore has bigger fluctuations.

At any rate, the message is that if you are a crackpot and if you want to compete with well-known scientific blogs, the only thing you need is to lose presidential elections and to shoot a movie about the imminent judgment day. Subsequent ideas of yours about the millions of degrees inside the soil will have the same impact as serious scientific analyses of others.

It's somewhat interesting to compare demographics of visitors to TRF and AlGore.COM.