Czech media (EN) just reported that the Czech schools may no longer teach neat handwriting in the future. 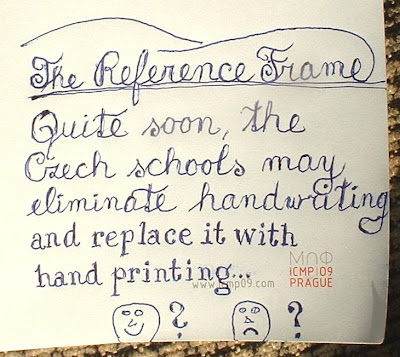 Children could learn handprinting only. If you don't know what the difference is, check the picture above. The proponents of the change argue that the handwriting is useless and differs from the texts that the kids can see in the external world. That makes the kids confused.

Also, a five-year-old boy who was writing books at home and who was obviously better than William Shakespeare, Mark Twain, and George W. Bush combined began to hate writing after his teacher forced him to use neat handwriting instead of his ingenious script. ;-)


Well, as a kid, I was always irritated by the unnecessary "duality" between the handwritten and printed scripts and I didn't find the handwriting too much faster, despite its "continuity", and it's surely not more readable. But like others, I had to learn the handwriting, too.

It may be a useful change. In my opinion, it would be optimal for each kid to choose what he or she wants. And by the way, more importantly, it might be a good idea to teach pretty small children how to use keyboards to type text. Also, the kids may want to learn how to send text messages instead of learning how to talk because texting is already more important for the U.S. teens than talking. ;-)
Luboš Motl v 9:58 AM
Share