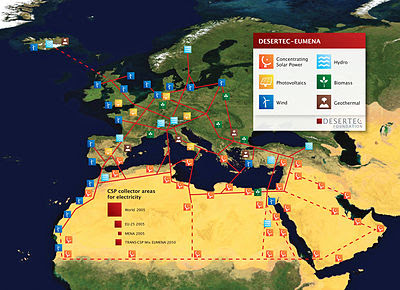 Desertec is an ambitious project initiated by the Club of Rome and TREC, i.e. Trans-Mediterranean Renewable Energy Corporation of Germany. They want to spend more than half a trillion dollars and build solar power plants on area equal to that of a "130 km x 130 km" square around Sahara that would cover 15% of the energy consumption of Europe.

The two "advantages" of the project are that the solar energy will be about twice more expensive than the energy based on the fossil fuels. Also, 15% of the dependence on Russia will be replaced by the dependence on the regimes led by bashi-bazooks in Africa. What a win-win situation. ;-)

The media disagree whether this project - that is only conceivable assuming huge subsidies justified by the global warming panic - will materialize. At any rate, there's still a chance that the project will make some sense: planning will continue through 2012 and the construction could end by 2050. By that time, the solar energy may become more economical.


As Chris Horner pointed out at Planet Gore, Ms Polly Higgins who recently urged the United Nations to adopt a new "ecocide" policy to execute employees of oil companies, climate skeptics, and other sane and productive people is on the board of Desertec. That doesn't sound terribly promising for the company.