His Altair 8800 was the first Intel 8080-based computer that could be used by the masses. It also helped Micro-Soft (as it used to be called) to earn the first well-deserved money.

Roberts had a company with Forrest Mims III, an eminent amateur scientist and advocate of Intelligent Design ;-) (and an AGW skeptic) who is still alive - together with two more people who joined. They would be building rockets for the amateurs, and calculators. 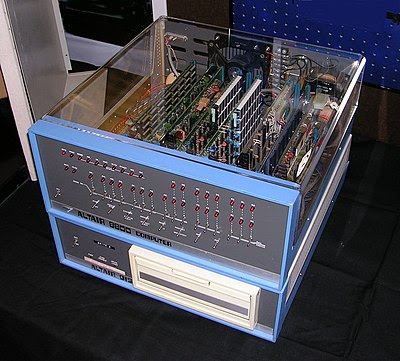 Altair 8800 - their first personal computer - had Intel 8080 in it, besides an 8-inch floppy disk drive. It would be extremely tough to write programs for it. But instead of 100 do-it-yourself packages with the computer that Edwards expected to sell to the hobbyists, he had sold thousands within a month. Things were still tough.


Fortunately, Harvard student Bill Gates and his friend of Boston, Paul Allen, read about Altair 8800 in 1975. They wrote Altair BASIC and Edwards was kind enough to use it for his gadget. Although I had done lots of machine code programs when I was a kid, I am still kind of amazed by the work they had to do before they wrote the first BASIC in the 8080 machine code. A byte after byte, they had to write the correct program in the machine code. 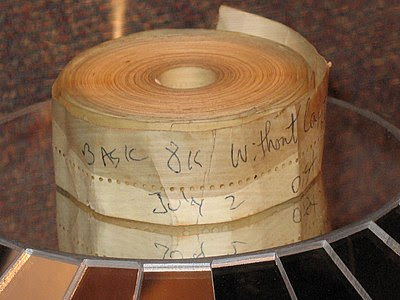 This paper tape would actually be the most advanced medium to store such programs in the mid 1970s. To make things even harder, they would write the program using an emulator on a different microprocessor. When Gates, Allen, and Edwards tried the BASIC for the first time, it would say "Altair BASIC" and crashed!

That was great enough a response for them to get thrilled and say Yes, let's do it. For the second time, they had to retype the BASIC from the tape. And they tried


and now imagine what happened. The computer said "4"! ;-) What an amazing success. The path through Microsoft's Commodore 64 BASIC - that your humble correspondent would play with 25 years ago - to Windows 7 was suddenly straightforward. :-)

Of course, the civilization sometimes depends on coincidences. If Roberts didn't allow Gates to earn the first money, the computer world would be very different today - and in my opinion, it would be far less advanced.

Exactly 3 years ago, I wrote an article about Paul Cohen, a mathematician and a hero of modern set theory, because he had died just a week earlier. Today, he would celebrate his birthday again: he was born in 1934. Via Sarah Kavassalis.
Luboš Motl v 2:13 PM
Share