Sadly, Polish president Lech Kaczynski and his wife died today in the morning above the Smolensk airport in Russia, together with 94 other passengers and crew members. Foggy weather, four attempts to land, crew's error, collision with a tree, fire, broken aircraft, no survivors.

Wikipedia on the tragedy

It's very hard to imagine a malicious role played by Russia (or by Donald Tusk - who was even claimed to cry today). He's been much less anti-Russian than most other Polish politicians. On the other hand, he wasn't invited to Prague by Obama two days ago. Lech Kaczynski himself may have forced the pilot - Arkadiusz Protasiuk - to land, despite the disapproval of the airport staff. Lech Kaczynski has previously survived 5 other air accidents and has a record of telling the pilots to land.

The 88 passengers plus 8 crew members traveled to Katyn to commemorate the massacre, exactly 70 years ago, of approximately 22,000 (hopefully not 22,096) Polish generals, intellectuals, and clerics by the Red Army.

Lech Kaczynski and his twin brother, Jaroslaw, as child 13-year-old actors in The Two Who Stole the Moon: isn't the video above cute? The boys, Jacek and Placek, only learned 1/2 of the alphabet each and they didn't like to work much. So they decided to steal the Moon, which is obviously made out of gold, before they defeated other robbers and began to work in agriculture.


As recently as in January 2010, Czech president Václav Klaus awarded Lech Kaczynski by the Order of the White Lion, the highest official honor in the Czech Republic. Clearly, conservative moderate Euroskeptic Kaczynski was one of Klaus's top political allies in the world; the personal chemistry worked, too. In an interview (text EN), Klaus - who was personally hit - remembers Kaczynski as an exceptional politician, his own friend, and a unique pal of Czechia who has made the maximum for the friendship of our two nations. 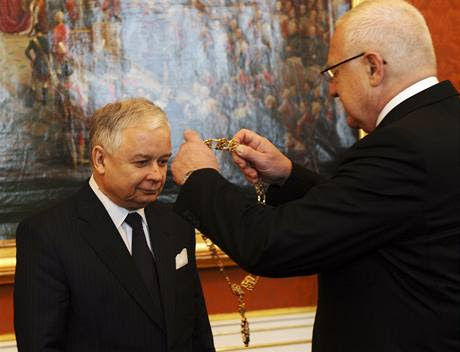 The other casualties include the Polish National Bank's governor, a vice-marshall of the Sejm, almost the whole leadership of the Polish army, and others. Condolences to Poland: I am really saddened myself.
Luboš Motl v 11:07 AM
Share