Imagine that you produce a product and your production suddenly jumps 10 times. It would be a pretty good improvement, wouldn't it? 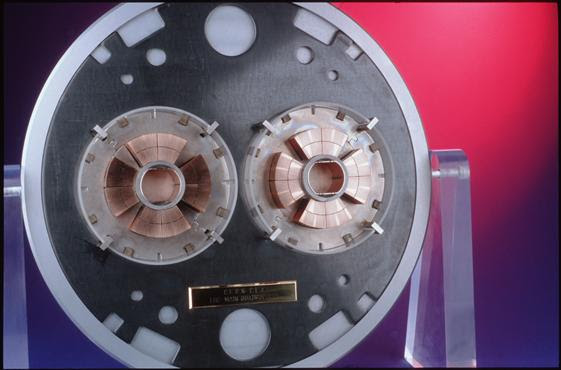 A quadrupole magnet: it plays a similar role to "lens" that can focus the beam in optics.

The LHC is producing collisions - a similar job to that of a heavyweight champion. And as CERN's twitter tweeted an hour ago, the collider has just improved the number of collisions per second by a factor of ten today!

How did they do it? Well, they went from 2 bunches per beam to 3 bunches per beam, and increased the number of protons per bunch from 10 billion to 12 billion. But that would only increase the luminosity by a factor of 2 or 3.


More importantly, they decreased the "beta" from 11 meters to 2 meters. In other words, they used the quadrupole magnets to "squeeze the beams". Such a change of "beta" reduces the width of the beams by a factor of "sqrt(5.5)" because the width is the geometric average of "beta" and the "emittance",


where the beam emittance of the LHC is about 4 micrometers (the uncertainty of the transverse momentum is inversely proportional, by the uncertainty principle).

Note that for "beta" equal to 2 meters, you get a width of 2.8 millimeters or so. Because the width decreased "sqrt(5.5)" times, the cross section (area) decreased about 5.5 times. Now, you shouldn't double count: that's how the luminosity increases because of the change of "beta".

The price you pay for a smaller beta is that the beam no longer has a uniform direction and quickly spreads, so you should only reduce "beta" right before the collisions.

The numbers don't quite add up but be sure that the rate of collisions has been improved by an order of magnitude. That should bring all the big discoveries 10 times closer. Good.
Luboš Motl v 6:58 PM
Share