A new one-hundred dollar banknote has been released.

The American currency is finally getting some basic security features that other currencies have had for many years - watermarks, metallic strips with changing colors, motley colors differently seen under the ultraviolet radiation depending on the angle, and so on.


It makes perfect sense that the fractional units have been eliminated. In the supermarket, prices of everything are written down with the accuracy of CZK 0.10, but the total price is rounded to the closest integer. Note that CZK 1 is about USD 0.05. You never make too many "physical" individual transactions that you couldn't afford the CZK 0.50 error margin.

By a direct translation, it would make a perfect sense to abolish the pennies, and round everything in all supermarkets to the closest multiple of USD 0.05 (= CZK 0.95). In fact, because Americans are supposed to be somewhat richer than Czechs, it may even make sense to abolish USD 0.05 and USD 0.10 as well, and round everything to the closest multiple of USD 0.25. Alternatively, quarters could be eliminated and replaced by USD 0.20 and USD 0.50 coins, and things could be rounded to multiples of USD 0.10.

In my opinion, it can be demonstrated that the hassle of dealing with the pennies can't possibly be beaten by the hypothetical economic losses for the society implied by the inaccuracies that would result from the cancellation of the pennies.

You know, the federal minimum wage is $7.25 per hour which is about 1/5 of a penny per second. When you pay a penny, you need to manipulate with it and it steals about 2.5 seconds of your life and 2.5 seconds of the cashier's life, so 5 man-seconds are gone and the penny is wasted during the single transaction, anyway! Let me generously neglect the fact that some people have income that exceeds the minimum wave.

And I don't even count the expenses needed to produce the coin in the first place: it costs 1.7 pennies to produce 1 penny. :-) With a similar rational approach, I think that you might agree even with the more radical plan to make the quarter the minimum unit. 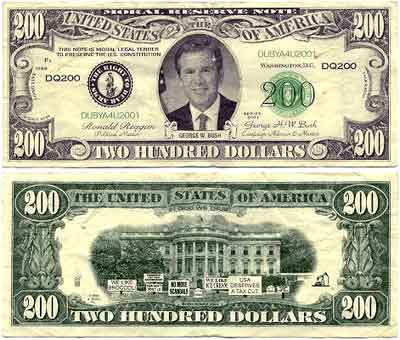 And on the contrary, there should exist bigger banknotes than $100, at least the $200 bill that would still fail to match the CZK 5000 note in Czechia. When you pay $5000 in cash, and it is not so incredible, it must simply be annoying to count fifty $100 bills.

In fact, it seems to me that there are many other illogically underdeveloped things in the U.S. financial system, e.g. how difficult it is to make various online money transfers etc. But let me not go into these things.

P.S.: Jorge sent me a document explaining the difficulties of introducing a one-dollar coin. The public didn't start to like it, they say. (I've always loved the $1 coin and was irritated by the fact that they would never give it to me.)

I am simply not getting it. We've never had any such problems. They introduced a CZK 20 coin - which is almost the same thing (and we also have the bi-metallic CZK 50 coin now) - and people just immediately start to use it. The document above claims that the countries that succeeded with the new coins had to abolish the existing banknotes. That's surely not the case of the CZK 50 coin which is widely used today despite the existence of the same-value bill.

When you get the new coin from the post office or elsewhere, what else should you do? They have the right to give you change in CZK 20 or CZK 50 coins, so you have to accept it, and when you accept it, you better use it instead of throwing it away. ;-) So you learn it the very first time you get it. The shops are legally obliged to accept it as a form of payment, too. I am really not getting what the problem is.

In fact, when we separated the currencies with Slovakia, after the Velvet Divorce, it was a completely smooth, essentially one-day event that caused no problems. And it was much more complicated because everything had to be replaced. An even more difficult transition was the transition to the euro that all eurozone countries have made. Why are similar things difficult in America?
Luboš Motl v 9:14 PM
Share