Pachauri won't leave even if he is fired

The Hindustan Times brought us some news about Rajendra Pachauri. Even if the independent panel finds that something is terribly wrong with the IPCC and Pachauri should go, he will refuse to leave. See also a longer interview in IBNlive. 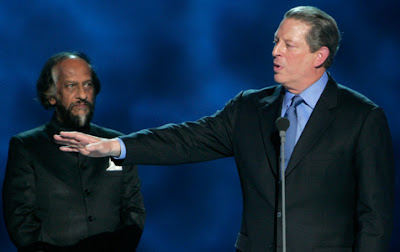 "I am just a f**king nobody, a mediocre railway engineer who managed to be elected the boss of a U.N. climate panel so you may bet that I will do everything to keep this feeding trough of mine," Pachauri thought but he used slightly different words. "The world has elected me by acclamation so I am destined to be your dictator forever," he said pretty much with the same words.

The journalists asked him whether he felt embarrassed that Ban Ki-Moon has ordered another independent panel to check the activities of the IPCC. However, Pachauri protested: "That's wrong. Ban Ki-Moon and myself have both chosen the Inter-Academic Council [to produce another whitewash] and both of us signed the letter to them," Pachauri proudly stated.


That's pretty incredible for the very panel that should be audited to be personally co-choosing the "auditor". Apologies but if Pachauri's statement about the signatures is true, I have personally lost my confidence in the value of Robbert Dijkgraaf's panel's findings.

Steve Colbert moderated a climate vs weather debate - Ekwurzel vs Bastardi. I actually think he did a good job, was funny, wise, and impartial. And maybe even more skeptical than his holy template, Bill O'Reilly. ;-)

"Sir" John Houghton vows jihad against "naysayers". For example, he wants to sue the people who quote him as saying "Unless we announce disasters, no one will listen." However, he manages to hide that he has actually said something nearly identical, namely "If we want a good environmental policy in the future, we'll have to have a disaster."

Also, John Houghton believes that unlike the rest of the alarmists, he is personally not an idiot - which is why the skeptics attack other people only, as he argues. Well, The Reference Frame has debunked several collections of misconceptions of Mr Houghton, too. So he doesn't seem to differ from the rest. See e.g. John Houghton about eco-fanatics.
Luboš Motl v 7:50 PM
Share