If you think that the Czech Republic is protected against all the AGW insanities - and they're not allowed to enter our territory - you're unfortunately wrong.

Two weeks ago, the Czech Parliament has copied an EU bill that wants to define the rules how to trade with the carbon indulgences, especially when it comes to the airlines.

Well, we still have a president who can veto such things.

That's why the airlines don't have to buy the carbon indulgences so far. However, the veto is pretty likely to be overruled by an "enhanced majority" of deputies in the Parliament who are afraid that they will be spanked by their EU masters and mistresses.

In many similar situations, the Czech constitution only allows Klaus to be a "delayer".

On April 14th, 2010, the president of the republic, Václav Klaus, sent a letter to the chairman of the lower chamber of the Czech Parliament, Mr Miloslav Vlček, in which he clarifies the reasons why he returned the bill about the conditions of trading with the greenhouse gas permits: 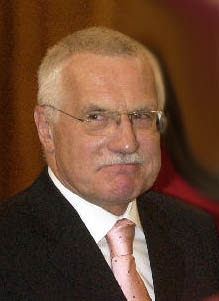 on March 31st, I received the government's proposal for a bill that would amend the bill 695/2004 of the collection, about the trading with the permits to emit greenhouse gases, and about the change of various laws as articulated by newer regulations, and the bill 86/2002 of the collection, about the protection of the air and about the change to some other laws (the Air Protection Act), as described in newer regulations, which is a transposition of the direction of the European Parliament and the Council No. 2008/101/ES about the incorporation of the airline industry to the European system of permits for emission of greenhouse gases. The proposal by the government was discussed in the lower chamber on March 17th, 2010.

I am using the competence given to me by Article 50 of the Constitution of the Czech Republic and I am returning the amendment of the bill 695/2004, about the conditions to trade permits for greenhouse gase emissions and about the modification of various laws, as articulated by new regulations, and the bill 86/2002, the Air Protection Act, and about the amendment of some other laws (the bill about the protection of the air), as articulated in newer regulations.

[Sorry, I have no training whatsoever to translate this Czech legal jargon into English. The text will become somewhat more readable soon. LM]

I am returning the bill for reasons that can be divided to three layers:

1. Reasons constitutionally judicial, related to the sovereignty of the Czech Republic

The bill which is an implemention of an EU directive, and especially the method used to adopt it, are just another example of the denial of the meaning of the parliamentary democracy, and another step meant to remove the Czech Republic from the family of sovereign countries or states. In similar situations (that have become very frequent), our Parliament is just a "voting machine" that "applies" the EU directives. It essentially doesn't think about them and it doesn't discuss them. By its nearly unanimous voting, it makes a demonstrative gesture showing that it has really no choice and that the merits of certain important laws that are being approved by this Parliament no longer belong among its competences. As the president of the Czech Republic, I cannot become reconciled with such dynamics.

2. Factual reasons - dangerous extension of the trade with "permits" to newer and additional sectors of the economy

The very goal of the trading with the so-called emission permits - i.e. the alleged reduction of the "greenhouse gases" - is just another drastic intervention into the economic freedom that is being justified in a very questionable way because the global warming doctrine - and especially its scientific foundations - have de facto collapsed. However, it's equally important to notice that by extending these policies to new and additional commodities, the lawmakers are creating a "shadow market", a de facto shadow currency with an ill-defined liquidity, and shadow outstanding debts and credits. These entities represent a time bomb beneath our whole economy which is, in the context of the consequences of the global economic crisis, extraordinarily irresponsible. The application of the law would also bring the increase of the price of air tickets and, consequently, the reduced competitiveness of Czech airlines on the non-European markets.

Even if we accepted the doctrine about the necessary reductions to CO2 production as a serious matter, it's necessary to note that the airlines only contribute about 3% to the total CO2 emissions in the European Union. In other words: the price paid for this demonstrative, symbolic, political step and its impact on our economy are completely incommensurate to its real impact [on the CO2 levels or the climate].

All these issues should have been discussed in the Parliament - but they haven't been.

The bill incorporates the European Commission's directive into our legal system before the process of its creation has been completed. This technical fact was pointed out by the very translator of this bill, former environment minister Mr Jan Dusík (John Nitrogen), when he said, during the parliamentary hearings about this bill, that the EC's methodology would only be adopted in the future and it was not yet available at that moment. However, when it comes to the application of this bill, this very methodology is the key. The usual argument that the failure to adopt this EU norm will put the Czech Republic at risk of sanctions by the European Commission is afield in this case because the Commission itself hasn't yet clarified how it will proceed. The implementation of the EC directive into a bill whose executive recipes do not yet exist and that will very likely require another amendment very soon, would only help to further reduce the credibility of our legal system, including its enforceability.

Moreover, it's completely unrealistic to require the airlines to offer detailed data, within two weeks after the bill comes to force, about the activities incorporated to the trade with the permits up to the year 2013, especially because the data must be properly justified and independently audited.

Because of all these reasons, I am returning the bill for new, in this case genuine, hearings.