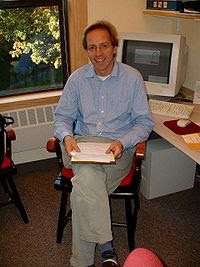 NRC Handelsblad in the Netherlands has printed an interview with Robbert Dijkgraaf, the main reviewer of the IPCC panel who was invited by a letter from Pachauri and Ban Ki-Moon to look at the functioning of the IPCC:


IPCC reviewer: 'Every good scientist is a sceptic by nature' (interview)

Dijkgraaf says many idealistic things about the scientists' duty to be skeptics; general observations about the complexity of the information flows in the modern society; the co-existence of science and politics; the inability of politicians and laymen to understand the margins of errors and probabilities; and so on.

I think that Robbert shows that he is wise and knows a lot, although some kind of separation from the real world is still penetrating his answers. However, I completely share Steve McIntyre's surprise - if I avoid the word "shock" for a while - caused by the following comment of Robbert about the ClimateGate:


Those emails are not directly related to the work of the IPCC.

Wow. How can they fail to be "directly related"? The acronym IPCC appears in 357 e-mails from the CRU archive. And the acronym not only appears there: the e-mails tell us a lot - if not "pretty much everything" - about the work of the IPCC.

I really don't understand how Robbert wants to investigate the work of the IPCC without looking at the CRU e-mails carefully. Does he plan to ask Michael Mann: "Are you the most honest scientist in the history of science?" And Michael Mann will answer: "Yes, I am." That will allow Robbert to write his report about the IPCC, won't it? ;-)

(By the way, Michael Mann is threatening a lawsuit over the excellent "Hide the Decline" music video. The link points to a version with Czech subtitles: we have the freedom of speech in Czechia, especially when it comes to nasty gangsters of Mann's caliber. Meanwhile, M4GW suspended the original version of the video, and the No-cap-and-trade coalition replaced it with a new version where a "generic scientist" plays the role of Mann.)

Indeed, I can't believe how Robbert can say something so breathtakingly stupid. Just a few examples from the ClimateGate e-mails that tell us something relevant about the actual work of the IPCC that Robbert Dijkgraaf is supposed to be evaluating now. For example, how do they choose the "benchmarks" that determine the "normal temperature"?

There is a preference in the atmospheric observations chapter of IPCC AR4 to stay with the 1961-1990 normals. This is partly because a change of normals confuses users, e.g. anomalies will seem less positive than before if we change to newer normals, so the impression of global warming will be muted. Also we may wish to wait till there are 30 years of satellite data, i.e until we can compute 1981-2010 normals, which will then be globally complete for some parameters like sea surface temperature.

Or what how does the IPCC plan to deal with the Medieval Warm Period?

Thanks Phil, and Thanks Tom W and Keith for your willingness to help/sign on. This certainly gives us a "quorum" pending even a few possible additional signatories I'm waiting to hear back from. [...]

[...] addresses a good earlier point that Peck made w/ regard to the memo, that it would be nice to try to "contain" the putative "MWP", even if we don't yet have a hemispheric mean reconstruction available that far back [Phil and I have one in review--not sure it is kosher to show that yet though--I've put in an inquiry to Judy Jacobs at AGU about this]. If we wanted to be fancy, we could do this the way certain plots were presented in one of the past IPCC reports (was it 1990?) in which a spatial map was provided in the center [...]

Everyone knows how the IPCC manipulates with the information that could be important later:

Mike,
Can you delete any emails you may have had with Keith re AR4? Keith will do likewise. He's not in at the moment - minor family crisis. Can you also email Gene and get him to do the same? I don't have his new email address.
We will be getting Caspar to do likewise. I see that CA claim they discovered the 1945 problem in the Nature paper!!
Cheers Phil

Is the IPCC aligned with the interests of science? Keith Briffa gave us an answer here:

Mike, your words are a real boost to me at the moment. I found myself questioning the whole process and being often frustrated at the formulaic way things had to be done - often wasting time and going down dead ends. I really thank you for taking the time to say these kind words . I tried hard to balance the needs of the science and the IPCC, which were not always the same. I worried that you might think I gave the impression of not supporting you well enough while trying to report on the issues and uncertainties. Much had to be removed and I was particularly unhappy that I could not get the statement into the SPM regarding the AR4 reinforcement of the results and conclusions of the TAR. I tried my best but we were basically railroaded by Susan [Solomon]. I am happy to pass the mantle on to someone else next time. I feel I have basically produced nothing original or substantive of my own since this whole process started. I am at this moment , having to work on the ENV submission to the forthcoming UK Research Assessment exercise , again instead of actually doing some useful research ! Anyway thanks again Mike.... really appreciated when it comes from you very best wishes
Keith

Who is choosing what papers can be included to the IPCC reports and how?

[...] I can't see either of these papers being in the next IPCC report. Kevin and I will keep them out somehow - even if we have to redefine what the peer-review literature is !
Cheers, Phil

And we could continue. At any rate, the statement that the e-mails are not directly relevant to the investigation of the IPCC's procedures is just flabbergasting. Were you serious, Robbert? Do you have any clue about the reality? I was probably way too naive when I considered it plausible that you could do this job fairly.

Bonus I: a partial list of things caused by global warming, a music video. 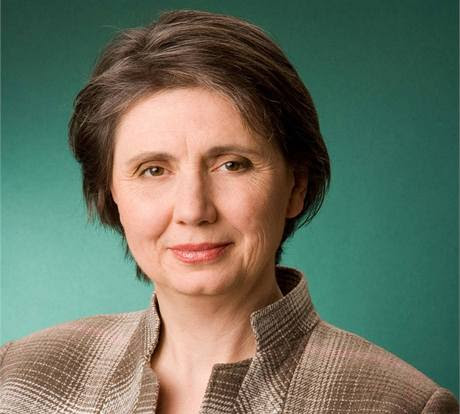 As you may have noticed, former Czech environment minister, Mr Jan Dusík (John Nitrogen), has resigned because he realized that he couldn't realize the dream of himself, Greenpeace, and Micronesian bashi-bazooks to stop the upgrade of the largest Czech coal power plant in Prunéřov that "will sink Micronesia". ;-)

He was replaced by Dr/Ms Rut Bízková. Unlike the ideologically green types, this former member of the center-right Civic Democratic Party actually knows something about the subject. She has a degree from the University of Chemical Technologies in Prague and a postgraduate degree in mathematics. You know, it's a lady who doesn't have to be superficially told that CO2 is a harmless gas: after 5 years of chemical engineering courses, you learn much more detailed insights, too.

Later, she worked for ČEZ, the main power utility. Since 2004, she's been active in the Czech Environmental Agency. In 2006, she was nominated by the "Children of the Earth" for the anti-green award, Petroleus mostensis (Oil Seal of the Year, Ropák roku), for her promotion of the increase of our electricity exports and our CO2 "caps".

The first steps she did in her new job of a minister include the firing of the deputies. Even more importantly, she has abolished a whole section of the ministry - the "Climate Protection" Department created by the former Green Party boss, Mr Martin Bursík, who was then the minister, three years ago - because it's a piece of bureaucratic garbage that has no room in the government of a civilized country. She would include some remnants of the department in two other departments, the economical one and one dedicated to air pollution.

Her main initial focus will be to lower the real dangerous emissions of various toxins in Northern Moravia (Mittal and others) which is rightfully criticized by the local residents. Clearly, she kind of knows what the actual environmental problems are. 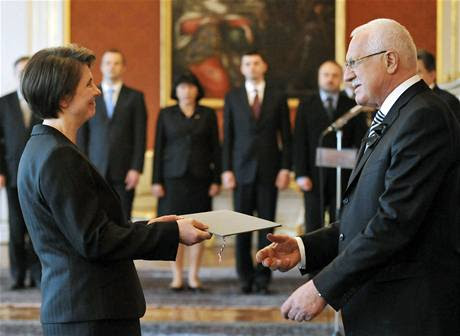 I don't like apolitical politics as a principle - she had to leave the Civic Democratic Party before she could join the current "technocratic" government - but it would be foolish to say that every event induced by apolitical politics has to be bad.

In political politics, the environment minister would be a green party member whenever the greens were a part of the coalition - because they have "conquered" the sector. However, this rule thankfully doesn't work now so a person who actually knows something about science (and chemistry and engineering!) - instead of a green type - can become the minister of this science-loaded sector.

This "technocratic" government will only continue for a month or so. But the good news is that the good environmental changes initiated by this government are unlikely to be undone after May 2010 because the Green Party will almost certainly fail to defend its seats in the Parliament. It will follow the fate of the far-right "Republican" party that has just dropped out of our political system and no one is missing it too much. ;-)