In classical physics, observables are continuous functions of each other. When a charged object moves just a little bit, it radiates just a tiny amount of energy in the form of electromagnetic waves.

However, in quantum physics, energy can't be arbitrarily small.

When the frequency of the motion of a charged particle is "f", the minimum energy that can be radiated away is "E=hf" where "h" is Planck's constant: it's the energy of one photon. So instead of emitting a tiny amount of energy, the system has a tiny probability to emit a finite, larger amount of energy. 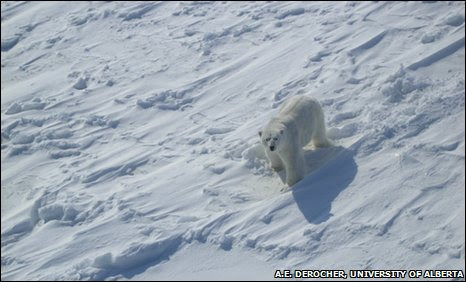 BBC has promoted new research that shows that polar bears behave just like the photons:

Peter Molnar of Alberta summarized his research as follows:


We may not see any substantial effect on polar bear reproduction and survival until some threshold is passed.

At that point reproduction and survival will decline dramatically and very rapidly.

His research may be applied in hundreds of other areas of science about the impacts of global warming. When the nasty deniers and heretics were blasphemously complaining that none of the catastrophic effects was happening, at least not persistently and globally, the poor concerned scientists didn't have anything to offer.


Now, with Molnar's excellent new idea, the situation has changed dramatically. They can always say: "Screw any observations." The observations may show whatever they want and no change can be apparently occurring. However, at some tipping point, when the global mean temperature reaches 15.001917 °C, all the catastrophes take place overnight, very dramatically, and very rapidly. ;-)

For example, Molnar explains how the period of starvation grows longer and the survival rate depends nonlinearly on the time period. Well, nonlinearities are fine and omnipresent but what he really needs for the blockquoted assertion above are not just nonlinearities: he needs a discontinuity, and a pretty dramatic one.

Because none of the quantities - such as the number of days the bear can survive in some conditions, or without food; or the number of extra days without food caused by the temperature change by 1 degree in either direction, and so on - is sharply defined, one has to compute the average over a whole interval that supports the distribution to get a realistic result.

When it's done so, you will predict that the number of the dying bears per year depends on the temperature continuously. So it can't really happen that "no effect" will suddenly change to a "dramatic effect". What he writes makes no sense for classical objects governed by many stochastic processes.

But even if you imagined that you believe that the bears will have a problem with their food; and that it is inconceivable to put them at risk of extinction, does it imply that we must spend a trillion of dollars per year to decarbonize the economy?

Well, let's calculate a little bit. A pound of meat that is good enough for a polar bear costs at most $1 - you can buy good enough pork for your own dinner for that price. A polar bear eats 18 pounds of meat a day. All 25,000 polar bears on the Earth eat 450,000 pounds a day or so. Molnar warns us that in a century or two, polar bears may have 2 more months a year when they have a problem to find food.

Now, let's give them everything they need. Multiply 60 (days) by 450,000 pounds (per day) and you will get 27 million pounds which is 27 million dollars per year. That's almost 40,000 times less than one trillion, the expected annual costs of the decarbonization projects. Add some transportation fees which are not substantial. You see that it's still tens of thousands of times cheaper to simply feed the polar bears when needed.

A famous weatherman has proposed to perform a somewhat more rigorous research to compute how many people - currently fed by the AGW panic - will be starved to death once the AGW superstitions will be rejected by all the grant agencies, too.
Luboš Motl v 5:59 PM
Share