Czech elections on Friday and Saturday

Only a very small percentage of the readers wants to follow Czech politics but if you're one of them, here's an update about the Parliamentary elections on Friday and Saturday.

The last elections in 2006 created an unstable center-right coalition including the center-right Civic Democratic Party (ODS) as the major player and the Christian Democratic Union and the Green Party (which is not "really" leftist in the Czech context, but it is still excessively green) as the minor players.

During the Czech EU presidency in H1 of 2009, the social democratic and communist opposition managed to overthrow the government of Mr Topolánek. After many attempts, the no-confidence vote worked for them. A technocratic neutral government by Mr Jan Fischer has replaced Mr Topolánek's government.

The Parliament thought that it could simply dissolve itself and schedule early elections. However, the Czech Constitutional Court shocked everyone when it ruled that the deputies who would lose their job because of the changes of the political landscape actually have a right to continue to be deputies for the whole period and the majority of the Parliament therefore doesn't have the right to dissolve itself. ;-)

After some surprising screaming after this shock, the Czech public and the Czech political sphere accepted these rules of the constitutional game and everyone waited for the regular elections which came now, at the end of May 2010.

The political parties have changed in many ways since 2006. First, the Green Party is unlikely to defend its seats (from 5+ percent in 2006) in the Parliament. It will follow the example of the far-right "Republican" Party of Mr Sládek that used to be a source of political entertainment and black humor in the 1990s but that eventually evaporated and almost no one is missing them.

It will be the same thing with the Green Party which may have been more acceptable in various respects but it was equally or more insane in other respects and it was much more boring than Mr Sládek's openly racist party.

The center-right Civic Democratic Party ultimately lost its chairman, Mr Mirek Topolánek, who was never a genuine friend of the party's founder, President Klaus. But let me admit, I have always considered Topolánek to be an OK politician. After various political losses, semi-erect pornographic scandals, and especially after his candid words about gays, Jews, church, Czechs, and dumplings for a gay magazine from Mr Topolánek's mouth, Topolánek resigned and was replaced by Mr Petr Nečas (Peter Non-time; Non-time means "bad weather") as the leader who turned out to be more acceptable to President Klaus. Nečas is arguably less charismatic than Mr Topolánek (and, obviously, Klaus himself).

Nevertheless, their ODS party has weakened considerably, showing that Topolánek or his absence don't make any difference. The social democratic party will essentially keep its 2006 results, much like the communists who may have gained a little bit.

The centrist Christian Democratic Union - Czechoslovak People's Party (they keep this complicated composite name) has split into a part that preserved its old name and a new branch called "TOP 09" - Tradition, O-responsibility, Prosperity 2009 - led by Mr Miroslav Kalousek and by Mr Karel Schwarzenberg and other representatives of the Bohemian and Austrian aristocracy (such as Mr Lobkowicz in Pilsen). ;-)

TOP 09 is meant to be a conservative - and fiscally conservative - party attempting to avoid various excesses of ODS that can only occur to infidels. ;-) It has quickly overshadowed its "parent" party, KDU, and absorbed many former voters of ODS as well. While TOP 09 is above 10% right now, the original KDU-ČSL is actually less likely than yes to defend its seats in the Parliament (5% threshold).

One more new party will sit in the house: the Public Affairs (VV), a centrist populist TV party of investigative journalist Mr Radek John. He's been OK on TV - and actually showed many actual problems and scandals from a reasonable perspective - but it's clear that he doesn't really know much what's needed in politics and much of his/their success is about the hatred against politics as a matter of principle rather than a positive program.

Here are the numbers predicted by my preferred poll three days ago: 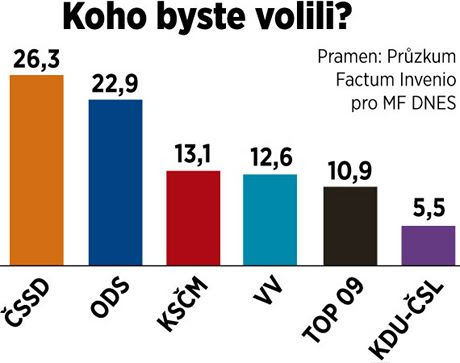 Social democrats: 26 percent
Civic democrats: 23 percent (other polls predict a much bigger gap than 3 percent, up to 10 percent)
Commies: 13 percent
Public Affairs: 12 percent
TOP 09: 11 percent
KDU-ČSL: 5 percent - not clear whether above the 5% threshold

Other parties with some moderate change to surpass 5 percent:

Unfortunately, others such as The Party of Free Citizens (Euroskeptics of Mr Petr Mach and others, a Czech UKIP party that I would vote if I didn't know that it would be a safely lost vote) will probably stay close to 1 percent or less.

The social democrats will win the elections. But their leaders, Mr Jiří Quimby Paroubek, Mayor of Springfield, has a pretty low coalition potential. Their own party's regulations prohibit them to make a coalition with the communists (even though their ideology is almost identical - and they're actually more aggressive than the commies when it comes to attacking right-wing people). Also, he will try to avoid the left-right "grand" coalition with the center-right ODS even though they would have enough votes - because they've been fighting a lot in the campaign. At least for a while, he is likely to avoid it.

So Paroubek will try to create a non-communist coalition with VV (TV party) and TOP 09 (Aristocratic Party). Paroubek is clearly eager to create such a coalition: the partners would be kind of "popular" or "innocent" (more popular than himself), but he would still be in charge of the game. The three parties will surely have enough votes for such a coalition. But the smaller new players reject such a socialist-led coalition now and they may continue to do so after the elections.

If this ČSSD+VV+TOP coalition fails, Paroubek will try to create either a minority government supported by the commies - assuming that they exceed 50 percent in the Parliament. This is a de facto coalition with the communists, a diluted form of something that has been considered unthinkable for 20 years.

If that fails, ČSSD will try to create the "grand" coalition with their center-right foes, ODS. If that happens, it's pretty likely that both parties will prefer to fill the allegedly huge "gap" between them by another party - such as VV - that would contribute to an even bigger coalition.

ČSSD doesn't have too many other choices.

if ČSSD fails, ODS will try to construct the government. It may try to create a "grand" coalition, too. I have already discussed it. Alternatively, it may try to create a non-left-wing coalition - everyone except for the socialists and communists - but it is not clear whether these parties will have enough deputies for that. (Note that this question is the negation of the question whether communists and socialists can de facto create a coalition.)

There are many options but it seems pretty likely that all coalitions except for the "grand" coalition and the "extended grand" coalition will be as fragile as they used to be after most of the previous elections.
Luboš Motl v 6:27 PM
Share