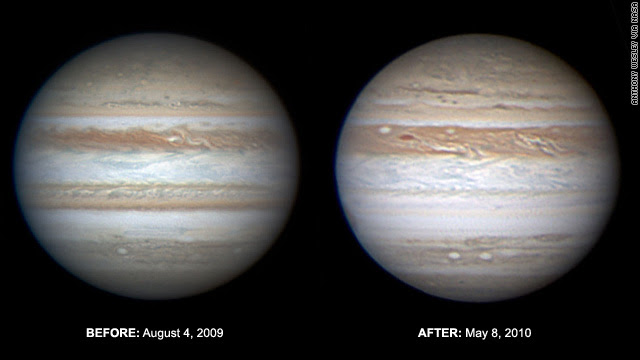 Jupiter's South Equatorial Belt (SEB) has disappeared in less than a year. Can you spot the difference?

"There is a scientific consensus that climate change, especially such a fast and visually stunning one, is caused by humans," James Hansen said. "It makes it clear that there must be lots of humans living on Jupiter."

"We usually imagine man-made climate change as a few tenths of a degree. But the interior of Jupiter is incredibly hot and continues to warm, by millions of degrees," Al Gore added.


He also promised that his footprint, including that of his villas in Nashville and Santa Barbara, would remain tiny and he would never team up with or speak on behalf of the evil Jovian aliens who are half men, half bears, and half pigs and who seem to have such a huge footprint.

Somewhat more seriously, such internal variability simply does exist. You may say that the Southern belt is analogous to the Earth's El Nino - but influences the looks of Jupiter in the visible spectrum, too.

What is the magnitude, frequency, and the degree of regularity of such effects is a legitimate scientific question and the answer is surely not zero. Such quantities depend on the size and composition of the planet and its atmosphere and many other things.

While many of the comments above were partially jokes, it is a very serious fact that a truly scientific explanation of the climate variability has to be compatible with the behavior of other planets - because the Earth does follow the same laws of physics, after all.

If someone says that "certain" changes on the Earth had to be man-made, he should define what the word "certain" means and why it doesn't contradict the manifestly natural changes we observe elsewhere in the Cosmos.

But the advocates of certain ideologies don't have to be worried about these problems that have a high capacity to immediately falsify many "big statements" about the climate change, especially "no-go theorems" claiming that something is impossible naturally.
Luboš Motl v 8:51 AM
Share