A Czech climate skeptic blog, klimaskeptik.cz, has offered an interesting interpretation of the recent environmental tragedy in the Gulf of Mexico. 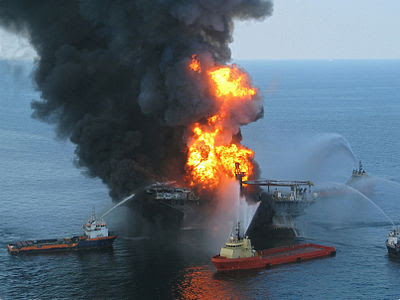 Recall that The Deepwater Horizon, an offshore oil rig that belongs to the self-called company Beyond Petroleum (BP), a British oil giant, exploded last week and the company was apparently unable to truncate the oil spill. I am a layman but I am shocked that they can't contain the spot into a predetermined area by a system of pontons, and burn/suck the oil, but it also sounds unlikely that the BP experts would be unable to solve the situation if it were easy.

The 1989 Exxon Valdez tragedy in Alaska was a big warning. The oil companies were forced to introduce the double hull design (two bottoms). It's clear that at least a similar lesson has to be learned from the recent tragedy in the Gulf of Mexico. Because similar large oil spills occur every other decade, a technology has to be developed to efficiently fight with the next one, regardless of the reasons. I am sure that it can be developed and produced for a few billions dollars.


Don't assume that BP is happy that it can damage the environment. Within a week, it has lost $15 billion or so! Clearly, this incident could become an existential threat for the very company. At any rate, klimaskeptik.cz is referring to sources such as BBC, Capital Hill, and American Thinker to argue that the tragedy will probably help to kill the cap-and-trade bills in the U.S.

It's because the support of GOP's Lindsey Graham - and maybe others - for the cap-and-trade bill relied on a subtle trade that included Obama's open-mindedness about offshore drilling. (Graham has already renounced his immediate support for the carbon indulgence legislation - but he justified it by some political immigration bill priority issues.)

As Obama is more likely to turn negative towards offshore drilling again - and let's admit, this tragedy is a pretty understandable reason for such a flip-flop - the "marginal" Republicans are likely to revoke their previous commitment to the cap-and-trade bill, too.
Luboš Motl v 8:27 PM
Share