Pachauri's talk to the meta-IPCC panel


If you don't have MS Office, I recommend you to download the new and free PowerPoint viewer which is much faster than e.g. OpenOffice.

As AP mentioned, Pachauri "cautioned" the meta-IPCC panel not to "undermine the scientists' motivation". In other words, the railway engineer blackmailed the would-be independent panel and asked them not to dare to insult the AGW bigots' religious sensibilities and funding.

The slides are mostly about the "impressive" U.N. institutions and their complicated relationships. But let me choose slide 6 of 12 from Pachauri's talk. It shows the number of papers about climate change: 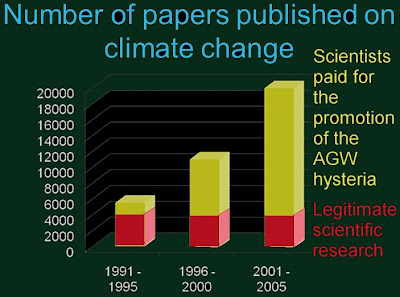 That's a pretty scary growth, especially if we appreciate the fact that the research hasn't found anything substantial about the climate in the last 15 years.

Clearly, the increase of the work - and corresponding salaries - entirely depends (or depended) on the recent AGW hysteria. The period 2006-2010 is omitted: it would probably be even worse, even if you assume that 2010 is the first year when this tumor will begin to be operated away from the scientific community.

So you can say that only a small portion of the research is the old-fashioned scientific work motivated by the desire to understand the system - while the bulk of the work (and income) only flows to the climate scientists because the AGW hysteria took over 20 years ago and it still exists.

Now, try to imagine that 90% of your income rests on an assumption or a belief. Wouldn't you be tempted to defend the assumption or the belief? You surely wouldn't but I guess you can imagine many other people who would. ;-)

The discipline is completely corrupt.

By the way, among the 12 slides, Pachauri dedicates exactly one slide, 11 or 12, to science, namely retreating glaciers. There is one graph over there. The glaciers are divided to 7 groups: Europe has been slightly growing since 1960, the Andes are completely constant, and the other five (Patagonia; NW USA and Canada; Asian high mountains; Arctic; and especially Alaska plus coast mountains) receded by melting between 2 and 6.5 millimeter of sea-level equivalent. In 50 years.

So assuming that the graph can be linearly extrapolated to mimic the industrial 1960-2010 period, you need about 500 years of this uniform retreat to get close to zero; and I am generously overlooking the likely fact that the Himalayan glaciers could be just a part of the 3.5 mm SLE reduction. (Also, I don't expect this trend to continue that far, but if it will, people will know about it centuries before the problems begin.)

Clearly, for the glaciers to disappear by 2035 which comes in just 25 years (or 2036, as Pachauri often says as the improved 2035 figure haha), you would need the recent trend measured during the industrial era to suddenly accelerate by a factor of twenty. ;-)

Many unexpected things may happen but can they be *this* unexpected, and should we choose exactly the Himalayan glaciers to be the locus of the coming miracle that determines our behavior?

Now, I can completely imagine that the retreat will indeed continue like that and in 350-1000 years or so, China or India will start to lose this traditional source of freshwater. They should better be prepared. But abandoning cars and other devices that consume fossil fuels is not a method to get ready: in fact, if and when the freshwater disappears, and even without any human impact, it simply can (Nature doesn't guarantee any insurance involving glaciers), vehicles and aircraft could be among the most useful things for many people of the future to save their lives. ;-)
Luboš Motl v 3:09 PM
Share