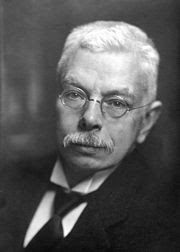 He received some classical education - in languages etc. - but he began to work in a lab and wrote a thesis on the Kerr effect in 1893: it's a magneto-optical effect in which reflectivity and polarization of a surface is changed if the surface is magnetized.

Three years later, in 1896, his supervisor explicitly banned him from using their laboratory gadgets to study spectra in the magnetic fields. Around the same time, Pieter Zeeman got an excellent and original idea: to study the behavior of the spectra in the presence of the magnetic fields. :-) (I don't actually claim that it was the nasty supervisor's idea.) The result looked like this:

And Zeeman was fired. But that was fine because in 1902, he received the Nobel prize with Hendrik Lorentz for the discovery of the Zeeman effect. ;-) Later, Zeeman would be interested in mass spectrometry. He became the secretary of the Royal Netherlands Academy of Arts and Sciences, too.

The splitting of the spectral lines is due to the "-mu.B" (inner product) coupling in the Hamiltonian. Here, "mu" may be written as the sum of the orbital "L" and internal "S" spins of all the electrons in the atom, with two different coefficients for "L" and "S". That sounds simple today but when the effect was first discovered, people didn't even know that there were electrons.

Obviously, the effect couldn't have made much sense in classical physics. But it strengthened the idea of light particles (electrons) orbiting the atomic nucleus (because the effect is so strong because "mu" is so big which is because the Bohr magneton is big, namely because this quantity is inversely proportional to the electron mass). And it has helped people to understand quantum mechanics later.

If the total "L" and the total "S" from the electrons don't commute, and they usually don't because of the "S.L" spin-orbital coupling, only the total "J" is conserved. In that case, "L" and "S" are executing precession around the fixed "J" axis. Their average values may be written as