TOP 09 (Tradition, Oh-responsibility, Prosperity 2009), a new Czech political party that separated from the centrist "Christian Democratic Union - Czechoslovak People's Party" one year ago and actually became not only the more right-wing but also the stronger one among the two (around 10% of the votes, while the Christian Democrats may slip below the 5% threshold) - doesn't like budget deficits and growing public debt. At least verbally, they don't like it.

There will be elections in Czechia on May 28th-29th, 2010. And Mr Kalousek of TOP 09, a former successful finance minister, had a cute idea to explain to the citizens what the public debt means - in a very pedagogical way. What is his trick? Well, hundreds of thousands of people have already received the following postal money order: 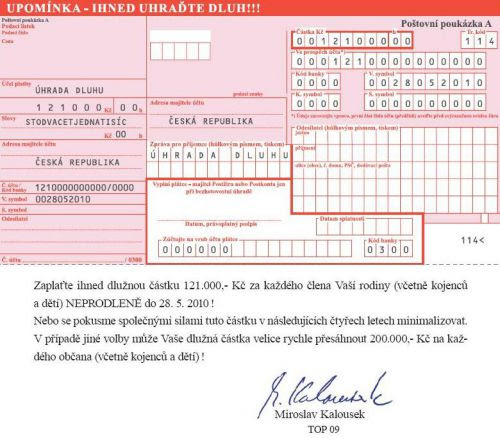 It looks just like the Czechs' preferred old-fashioned method to pay the monthly bills of various kinds (such as electricity bills), except for some missing logos and entries that you only see if you look carefully.


Alternatively, let's try to team up and attempt to minimize the amount in the next 4 years. In the case you choose someone else, there's a risk that the amount may quickly exceed $10,000 per citizen (including infants and children).


The (internal) public debt (denominated in CZK) is much bigger than it used to be - but it's still much smaller than in countries such as Greece where it would be around $30,000, approximately 6 times larger per capita. The U.S. figure is around $40,000 but it is believed that the U.S. is more capable to pay the debt; let's postpone the speculations whether such an assumption is justified. But recent years have shown that the debt can easily and quickly grow in the Czech Republic, too.

Needless to say, dozens of pensioners who have received the money order had to be treated by psychiatrists while dozens of others - and many political competitors of TOP 09 - try to sue the party. Police apparently understands the cleverness of the prank and it is likely that it won't harass TOP 09 for this "part of the election campaign".

Well, I also think that it is an excellent pedagogical game and one of the most original ideas in the recent election campaigns. In fact, more provocatively, I tend to think that the people should actually get such a real money order and pay the debt so that the government may start from zero and with balanced budgets. ;-)

I am disappointed by some parties that I moderately like for other reasons that have criticized the stunt. That includes "Sovereignty", the party of Ms Jana Bobošíková. Some of the explanations why they're "offended" by the money order unfortunately remind me of the hardcore socialist populism we know from Greece: the citizens are innocent, it's the evil politicians at the top who have created the debt.

Needless to say, I think that such an interpretation of the debt's origin is fundamentally wrong.

The real money that had to be borrowed were not really spent by politicians - at least not most of them. If you sum up all the salaries of the politicians, including the benefits and expenses that are spent "just for politics", you get a very small portion of the public budgets. Most of the money were spent - and is being spent - for various "universally desired" things paid from the public budget to the public. The public budgets contain many entries. All of them contribute to the expenditures and people may disagree with of them are "more desirable" and which of them "deserve to shrink" but the largest one is the sum of welfare payments to the "ordinary people".

It's very clear that it is the "ordinary people" who have ultimately spent most of the money. They were getting higher pensions or more expensive "free" health care than what the nation has produced. It is also the ordinary - and not only ordinary - people who will have to pay the debt. The decisions to make the spending was made by the politicians but the politicians were just doing whatever was needed to preserve their support by the public: in democracy, the politicians must be understood as doing what the people actually want, at least in the long run.

So the people themselves have created the debt and the people have to pay it. They will pay it (and the interests) through taxation because it's the only way how democracy collects money. In reality, it will be the wealthier people who will pay a larger portion of the debt - but it's true that it's mostly the poorer people who have helped to create the debt because they were the typical recipients of various social and other services paid by the government. TOP 09 chose the middle road and divided the debt equally - an obvious compromise between the two vastly different algorithms to attribute the debt. There's almost nothing incorrect or misleading about the money order.

I even agree with the proposition that the socialists and communists (and maybe others) would be likely to double the debt pretty soon - it's surely one of the more valid big propositions of the campaign. In fact, I am am more afraid of the possibility that even a TOP 09 government could substantially increase the debt.

The only inaccurate statement on the money order is that the debt has to be repaid by May 28th. Hopefully, while we only have 2 more weeks to decide how to vote, we have more time to pay the debt - but we don't have an infinitely long time.

It's great if some pensioners are shocked because it shows that they just heard the truth what the debt per capita actually is - and they're finally learning something, after 45+20 years of being brainwashed by the populist and irresponsible propaganda created by politicians who just wanted to stay in power and who did everything they could to hide the problems that their generous material promises to the people actually help to create. The politicians would only show the "positive part" of the public spending - because they wanted to look nice (and make all their expensive projects look nice) and to be re-elected.

So I applaud the TOP 09 folks for their great idea - although I am not sure whether the members of this party have been (and will be) as perfectly balanced managers of the public money as they seem to promise now.