Roy Spencer: feedbacks seem to erase most of warming


We may call this paper their own version of Lindzen-Choi 2009, a paper that pioneered a method that others are likely to be reusing and improving. Spencer et al. have just began with this process.

NASA's "CERES" satellites (Aqua, Terra) have measured the energy flows around the Earth for quite some time. Spencer took 7 years (2002-2009) of the data from the Aqua Satellite (looking above the oceans).

Recall that the sensitivity - the warming caused by CO2 doubling - is determined by the ability of the Earth to cool itself when the temperature rises. A degree of warming makes the Earth radiate more energy. The faster this increase of radiation is, the smaller temperature rise you get from the same perturbations such as the increase of CO2.

So if you believe that CO2 and other things lead to a small warming, you also believe that a fixed amount of warming is accompanied by a large increase of the energy outflow from the Earth. It's the ratio that matters.

At any rate, this is the key graph: 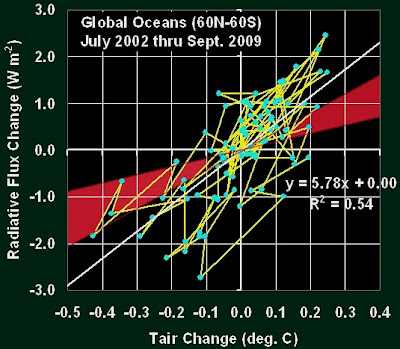 The x-axis is the temperature of the tropical troposphere - where the satellite-observed warming seems to be slow but the greenhouse theory predicts the fastest one. The y-axis is the total SW+LW energy outflux measured by NASA's Aqua.


If you just use all the datapoints - they're connected as you march through months from 2002 to 2009 -, linear regression gives you 5.78 Watts per squared meter of increased outgoing radiation per 1 °C of tropospheric warming.

However, if you just blindly use all the datapoints, without paying much attention how they were chronologically sorted, you effectively include mostly long-time intervals where the change of both quantities is dominated by noise and/or long-term changes to both quantities (that don't have to be correlated too well).

They contain "more signal" than the arbitrarily non-chronological slopes and they might be better sources of the calculated quantity. So if you compute the slope from the month-on-month changes of both quantities, you will actually obtain 10 Watts per squared meter per Celsius degree of warming - more than those 5.78 W/m^2/°C we obtained previously.

The figures 6 or 10 W/m^2/°C lead to something like 0.5 or 0.3 °C warming per CO2 doubling, well below the 3 °C "best estimate" of the IPCC. If this figure were true, the observed 20th century warming would already be greater than the effect of doubling. That would mean that by 2100, we should expect a slight cooling because the total warming has already "overshot" the calculated CO2-induced warming - and we may expect the natural warming (which was a part of the observed one) to be undone.

The IPCC's 2-4 °C interval for the climate sensitivity would require the slopes of the yellow links in the graph above to be mostly in the "red band" which is nearly horizontal - and visibly disagrees with the typical slope of the links which are mostly much more vertical.

My understanding is that the IPCC's "best esimate" actually predicts around 5 °C of warming in the tropical troposphere (hot spot) per CO2 doubling. This would correspond to nearly horizontal lines in the graph above (more horizontal than the "more horizontal red line" I drew) - and seems to be pretty clearly excluded by the data.

At any rate, we might say that the direct measurements of the energy outflows - and their increase with the temperature - seems to indicate that the IPCC overestimates the effect of CO2 by up to one order of magnitude!

You know, this is the kind of fascinating claim about a discrepancy that you would hear from Lord Monckton, and you may have remained skeptical. With all of our respect to Monckton's obvious wisdom and brightness, British lords may still be fallible, you would think. Well, now you will have a pretty much identical claim resulting from a transparent paper in Journal of Geophysical Research.

One possible loophole is that similar slopes calculated from the month-on-month changes neglect the "slower feedbacks" that take much more time than one month to materialize. If you're interested in the effect of CO2 that arrives later than after 1 month, you may get a bigger effect.

Fine, so this is a way to question the figure "10". But you still get the figure "6" that remains for intervals that last up to 7 year. So even if you include all the 7-year "slow feedbacks", the sensitivity ends up being around 0.5 °C only.

You may also amplify the sensitivity by a factor of two or so by using the land instead of the oceans, and surface temperatures instead of the (slower-warming) tropical troposphere. That would get you back to the no-feedback figure around 1 °C - but it's unlikely that you may reconcile this method with significantly larger values of sensitivity.
Luboš Motl v 11:47 AM
Share