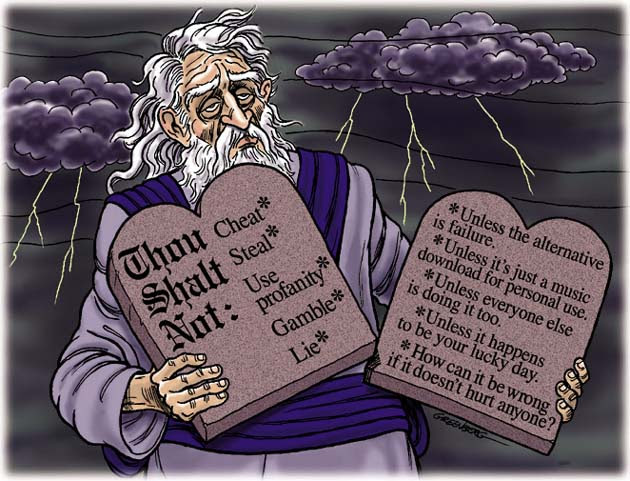 Sam Harris gave a TED talk that argued that

His fellow atheist activist Sean Carroll disagreed and wrote that

Obviously, I agree with Sean Carroll. He mentions three basic points I subscribe to:
Competing, subjective definitions of morality

Well, I don't even see this point - how is he counting them and how does he prove that this counting is correct? But even if it were true, the larger multiplicity of the "centrist peaks" on the "moral landscape" doesn't mean that these "centrist peaks" are better than the (more) extreme ones. I've said the same obvious fact in the anthropic discussions many times.

Pleasant feelings are not necessarily morality

I agree with Carroll's second point, too. Harris tells us that we don't have any compassion with stones because they can't suffer. Well, stones can surely not suffer through similar biological processes as humans. But the very opinion that the "human" way of suffering is the only thing to care about morally is another very problematic assumption.

Extraterrestrial aliens may have no brains that would be as localized organs as ours and the biochemistry of their hormones is almost certainly different from ours. Does it mean that they can't suffer? Even in the human context, how do you objectively divide "bad" and "good" hormones? Is it less moral to have a higher level of adrenaline in general? And even if some things apparently can't suffer, it doesn't mean we can't be compassionate about them. Let me admit that as a kid (and maybe later), I have felt compassionate about many toys or products or companies that were broken or lost or discontinued or went bankrupt. They're structures with their histories and "lives", too. Hormones are secondary.

After all, pain and similar things were not created as the final benchmarks of the well-being that one should achieve. They have only evolved as useful gadgets to protect us against various threats - and make us aware of them - but the ultimate purpose of the life is usually something that goes beyond the absence of pain or the presence of good feelings.

Good feelings themselves are superficial, anyway.

I don't view the morality based on good feelings to be terribly deep - quite on the contrary. It's the morality of drug addicts; it's not my kind of morality. And let me add something else: I do think that suffering does belong to morality, too. Moral people are ready to suffer and self-sacrifice for more grandiose values and goals; and bad people of various kinds do often deserve to suffer. Many groups of people clearly share this point of mine; they may still disagree who is "bad" and which further values are more "grandiose".

Sam Harris uses the example of groups like Taliban to argue that it's obvious that they are "objectively ignorant" about the morality - or well-being. And some people in his audience applaud him. But they only applaud him because they share his moral opinions about Taliban - which I largely share, too. But if he proposed a similar but more controversial question that divides the West, people wouldn't agree in this way. That simply proves that there's nothing objective about Harris' opinions: he's only using the majority of his audience to suppress the rest and to claim that the majority is the objective holder of all the moral truth.

Incidentally, Taliban as well as most other political groups in the world are doing the very same thing. This is not science. This is politics - a method to collect people with the same values and use them to suppress others. It is often morally wrong, it can also be morally good (according to some criteria but not others), but it's never objective science.

Accumulation of the moral utility function

Carroll's third point is a good one, too. It's not obvious whether the "well-being" or whatever measure you choose for the moral "index" of a decision should be summed over humans, whether they should get the same weights or different weights (should every moral question be decided by the feelings of the Chinese because they largely dominate the population?), and/or whether the computation should be non-linear. Clearly, all such choices are subjective. There's no objective, empirically justifiable method to show that one calculation is better than another calculation. And in fact, there's no sensible reason why an individual should think and calculate "globally" when he wants to decide which decision is the morally right one.

So for science, it's important to realize that it can tell us what is likely to happen if we do one thing or another, but beyond that, it can't tell us what we should actually do. Smoking may bring some pleasant feelings - that can be quantified by some hormones etc. - and it can also shorten human lives - which can also be demonstrated and explained scientifically. But everyone knows that. People want to know - or claim - more than that. But science simply can't tell a smoker whether he should quit.

(I do recommend him to quit but I am no fundamentalist.)

Whenever people face such dilemmas, they must clearly see arguments supporting both (or all) possible decisions. But the relative weight of such arguments can never be objectively determined so it's not surprising that people often decide in different ways. It may happen that most people (or a vast majority of people) will decide in one way or another. But this fact itself doesn't make their decision objectively true in the scientific sense. You can always find a bigger group - e.g. a bigger nation - that will decide differently.

Unfortunately, environmentalism - and its most extreme contemporary version, global warming alarmism - has blurred the boundaries between "is" and "ought". That's why the AGW orthodoxy can't be considered a genuine, pure science. It is a complex and interlinked social, economic, psychological, and political phenomenon that can only be understood - and fixed - in its entirety.

Even if CO2 were going to add 5 °C of warming per century (I find the IPCC mean value of 3 °C, which is already overestimated by a factor of 3 or so, so immensely unimpressive that I don't want to waste your time with such modest gedanken experiments), and even if some species were threatened by this hypothetical 5 °C of warming (and it's pretty much obvious that the number of such species is negligible), and even if many other problems followed, it still doesn't mean (or "imply" in the scientific or logical sense) that people should abandon fossil fuels.

Because the impact of carbon regulation or the absence of it is "marginal", "economical", and it can often be "undone" by other means, it's mostly accepted that the justification of such a possible policy should be determined by an economic analysis - a comparison of costs and benefits. Clearly, the economic costs of carbon regulation exceed the potential benefits by several orders of magnitude - and the environmental benefits are probably negative, anyway. ;-) So from this viewpoint, there couldn't be a rational debate: carbon regulation is an insanity.

Obviously, something else and deeply irrational and unscientific is behind the "new kind of morality" that is included in global warming alarmism. We can share these mysterious sentiments - our decisions don't have to be about the money, after all - but most of us don't share them whether or not the financial costs are the only factors we find worth considering. Whatever our attitude is, it cannot be justified by objective, scientific methods rooted in science. It depends on our value, the feelings what is "just" and "right" and what is not.

But this discussion is not restricted to the topic of AGW; it's much more general. It applies to eugenics or any other orthodoxy trying to tell the people how they should behave and how they should organize the society. Science itself is simply never enough to answer such questions and those who deny this fact have misunderstood the very basic character and purpose of science.
Luboš Motl v 9:53 PM
Share