Virginia Attorney General Ken Cuccinelli has begun an investigation of Michael Mann who was working at University of Virginia between 1999 and 2005 - right after he became famous for the his main "brainchild", the hockey stick graph - and who has received a substantial amount of the public money as a result of his hockey stick graph claims.

We're talking about half a million of dollars from the Virginia's state funds - which may be kind of "supervised" by the attorney general of the state - but of course, Mann has collected millions of dollars from other sources, too.

Because of the CRU e-mails, it seems conceivable if not likely to the prosecutor (and many of us) that Mann has committed a fraud against taxpayers as defined in a pretty clearly worded bill of the state of Virginia. Cuccinelli wants to see Mann's e-mails about the matters and other things. If he wins, Mann may be forced to return all the money plus other expenses.

Steve McIntyre strongly disagrees with Cuccinelli's activities because it's a witch hunt, Cuccinelli has become a bigger bully than Mann himself, and so on.


Well, Steve McIntyre has done many great things but when it comes to the basic insights about the AGW movement as a social phenomenon, I have never considered Steve to be a genuine skeptic - or at least not one of us "the deniers", so to say - so it shouldn't be too surprising that I completely disagree with Steve's opinions on this matter. Steve seems very naive to me.

Steve has seen - and, in fact, discovered - hundreds of "errors" in the AGW research that almost always happen to distort the reality in the "same direction" - as measured by their impact on policymaking - but Steve still thinks that it's surely just a collection of coincidences and the errors have nothing to do with the funding and the political goals, do they?

I find this guess to be very unlikely: it is de facto ridiculous. And you know, the academic freedoms exist to protect the scholars' freedom to articulate unpopular opinions but they don't exist to allow them to suck enhanced amounts of the taxpayers' money by scientific misconduct. Someone's being called "a scientist" can't provide him with this magic universal umbrella - Bernard Madoff could otherwise also claim that he was doing "a new kind of science".

Steve's neverending canonization of Judith Curry also seems strange to me. She's just trying to equip the same discredited preconceptions and predetermined final major conclusions about the climate with some "female human face". She explicitly claims that only the "makeup" of the existing climate science has to be improved.

And behind our backs, she's just badmouthing the skeptics. We learn that "pretty much everyone badmouths" Marc Morano, Rush Limbaugh, and Jim Inhofe. Well, I surely don't.

Her statement only means that she knows "pretty much no one" who is both sane and honest. And to pick an example, Rush Limbaugh - whose brand climatologist is Roy Spencer - is the most listened-to radio talk show host in America. 20 million Americans not only approve of his words but they actually listen to him every day. No doubt, these three people are closer to politics than many others and their politics is inconvenient to the likes of Ms Curry - but contrary to her assumptions, it doesn't mean that they're wrong. They have actually learned a great deal about the subject - and they have done more for the public's understanding of the key questions about the climate change than pretty much all alarmists in the world combined.

Back to Steve's assertions. 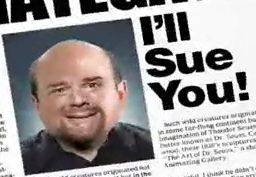 Is Cuccinelli bullying Mann? You bet. Is that wrong? Holy crap: Cuccinelli is the Attorney General. It's his job to be the #1 bully in his state. Steve's assertion that "Cuccinelli’s own expenditures on this adventure should be under equal scrutiny" as Mann's grants is completely preposterous.

Cuccinelli's very job description is to investigate potential criminals who have damaged the citizens of Virginia and he's clearly doing so. In fact, his office may be the most natural institution to do such things - especially in the atmosphere when the biased AGW advocates have filled many layers of the government and the Academia - layers that should normally be responsible for the "checks and balances" but they can only offer "whitewashes".

No other public official exists in Virginia to investigate and prosecute the Attorney General for his choice of the cases he pursues and that's true for a good reason: Virginia is a democracy so its Attorney General is actually elected in direct elections and Cuccinelli received 58% of the votes last year. (This paragraph originally stated that the AG is named by the governor.) On the other hand, Mann's job description has never been to push science towards particular policy goals or to bully skeptics. Mann was employed by UVA as a scientist which is something completely different. So when two people spend the public money for two different things, they are not doing the same thing, Steve.

Do I know a single fully analogous, institutionalized "witch hunt" against a climate skeptic? I probably don't. But let me also tell you why. It's because no skeptic has done as many dishonest and nasty things as the likes of Michael Mann.

For years if not decades, the climate alarmists have been harassing the climate skeptics wherever they could. In hundreds of "less visible" situations, climate skeptics were intimidated, verbally attacked, and their careers were deliberately and systematically undermined, despite the fact that pretty much no climate skeptic has ever received millions of dollars in grants. So it's logical that if someone's scientific misconduct has been much more obvious and he has received much more money for it, the investigation against him should be "much bigger".

This situation is pretty analogous to the dilemmas we had to face after the fall of communism. You know, communists were firing tens of thousands of inconvenient people from their jobs, their children were dismissed from schools, and many other things happened to the openly non-communist part of the population. But they were only keeping a few dissidents in the jail and they have executed pretty much no one for long decades.

After their regime collapsed, some of the communists may have been investigated or jailed. So someone may say that there was the same amount of bullying of democrats against the communists as the bullying in the opposite direction (excluding the 1950s).

Maybe. Except that the democrats who were arrested were pretty much innocent - they just had legitimately different opinions about political questions - while the communists were doing really bad things, harming many other citizens along the way (not to speak about executions in the 1950s or the treason that helped to bring the Soviet Army and others into Czechoslovakia in 1968). The communists were not prosecuted for their opinions: they were prosecuted for the damage they did to other people.

Let me also tell you something else. The climate alarmists have abandoned all the respect towards the impartiality of science and the academic freedom. Pretty much all of them have thrown scientific arguments away and they have replaced them by references to (fake) authorities - usually politically organized ones - that should almost be worshiped. Political power is the only thing they understand. So they must be talked to in the language they can understand.

When the death of the AGW movement began in November 2009, the public awareness of the serious problems in the climate research community significantly improved. Naturally, this change has to be reflected in the political power, too - in the balance of the institutions that are given the right to define justice. Clearly, investigations against climate alarmists who may have misappropriated the public funds has to become as simple as the investigation of the skeptics.

That's why I applaud Ken Cuccinelli's efforts to figure out whether Michael Mann is what he seems to be, a criminal and a witch that has to be hunted down, and I hope that eventually "bigger fish" will be investigated, too.