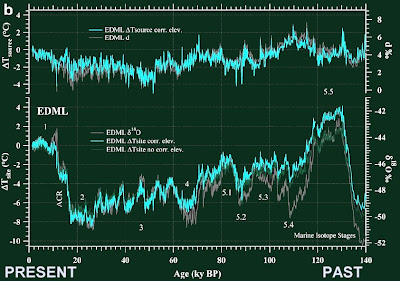 According to a new paper,

by B. Stenni and 14 European co-authors - which was published in Quaternary Science Reviews 29 (2010) -, new high-resolution ice core data from two sites in eastern Antarctica show temperature proxies more than 4 °C higher during the last interglacial (~130,000 years ago) than the present interglacial. The high resolution data provides more accurate determination of the temperature proxies, shown at lower left of each graph above.

Unless you are a young Earth creationist, it should be obvious to you that the paper shows that comments that 4 °C or even 2 °C of warming would be threatening for life don't seem compatible with the reconstructions of the climate. Pretty much all important organisms were the same 130,000 years ago as what they are today. Well, except for the white race, if you care about these details.

Nevertheless, the last interglacial ~130,000 years ago was the time when homo sapiens was really getting started (in Africa) so I suppose that those of us who can still be classified as "homo sapiens" - or "wise, knowing man" - shouldn't have a problem with this somewhat (4 °C) warmer climate, not even on the black continent.


The graph shows that the typical maximum-minimum temperature difference associated with the glaciation cycles is as high as 12 °C, at least at various places. Any man-made correction that is much smaller than that should simply be viewed as unimportant - a tiny modification within the natural variability. Still, there will be people who will never be convinced by any empirical evidence.

In his article Reluctance to let go, Sean Carroll urged the mankind to eliminate both religions and global warming realists. He doesn't seem to realize that the mental defects that lead him to his proclamations about the climate are at least as irrational as the spiritual drivers that lead other people to religions such as Christianity. And the Academia is unfortunately contaminated by thousands of similar Carrolls.