Back from a brainstorming session in Nice

wrApologies for the week of silence. 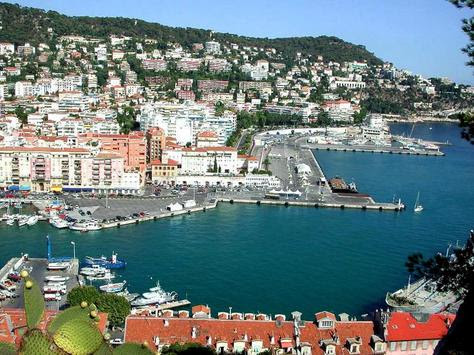 I am back from a retreat in Villefranche-sur-Mer, France. A group of 14 thinkers was debating the origin of life and everything. Because of the algorithm that David B. was creatively using to choose and kindly the participants and because of the invited people's algorithm to decide about their answer :-), I had the opportunity to meet the leading proponents of theories that require interventions during the creation of life and hear (and react to) their arguments, too.

They're kind of pleasant and thoughtful people - although I realize that I may get into lots of trouble just by writing a similar sentence.


Richard L. whose name is known to everyone who follows the AGW debates gave a talk about the sociology and history of the AGW movement and related changes in the institutionalized science.

Privately, he gave me an argument why we shouldn't believe cosmoclimatology too much - the atmosphere's enhanced ability to form clouds (because of cosmic rays or anything of the sort) may only lead to the birth of clouds at altitudes that differ by 50-100 meters from the original ones (while the total area covered by clouds is pretty much fixed) - so there's no detectable difference for the energy budget.

I will have to think about the arguments more carefully because small changes of the cloud-covered area are still enough to make a difference. It was very interesting to see how much Richard L. knows about many things such as the history of Jews in France and elsewhere - and how much we agree about various detailed unrelated topics such as the right magnitude of the interest rates and the reasons for them. ;-)

According to Richard L., "The Critic" by Mel Brooks (his first movie, 1963, and one that won an Academy Award) "seemed to place the art museum we visited into the context of our meeting." :-)

We had also a lot of fun with Christopher B. who is an old-fashioned British journalist and Gentleman and who knows many words in Czech which I always appreciate. :-)

I gave an introduction to string theory, cosmology, and the multiverse. Several talks were dedicated to technical analyses of various steps in the evolution of insects (G. B.), the evolution of whales (Richard S.), and mutations of the bacteria (Doug A.).

Michael D. described the evolution of his opinions about structuralism and functionalism as two basic philosophical schools to imagine the origin of life (life as crystals - inevitable shapes dictated by Nature; life as machines that are designed for a purpose). This question is somewhat independent from the evolution vs design debate because the functionalist schools does include Darwin as well as ID proponents.

I appreciated his immense excitement although I don't quite understand the "operational" difference between the two schools. After all, machines are also created by Nature - indirectly, through humans; and crystals are also built for a purpose, e.g. to minimize the energy of the atoms in the lattice. ;-) So there's no "fundamentally qualitative" difference and the main difference between the two groups - or endpoints - is the amount of complexity (and contrivedness) vs universality of the structures.

Our generous host Peter T. - who is arguably on a similar ideological boat as your humble correspondent because e.g. CapitalistImperialistPig dedicated an article named "Libertarian Whack" to him on his blog :-) (but dozens of articles are dedicated to me!) - gave a very sensible speech about why our world is ceasing to be scientific and another one about the origin of religions and the role of scapegoats in them.

Intense discussions followed after each talk as well as at all other times.

Victor S. - who is a very good oceanographer, as seen from his knowledge and good swimming :-) - gave me his recent interesting paper about the explanation of sleep as a recalibration of senses. He is Indian, despite the Czech name, and it was reassuring to be close to someone who would also almost certainly say "Evolution: Yes" if asked about this very issue. :-)

But you shouldn't imagine that the opponents of evolution were some religious nuts who spend their time with collective prayers. Quite on the contrary: their knowledge of biology has been vast. No doubt about that, I couldn't compare to them in the specifics. I am still convinced that something is flawed about their big picture but yes, I do admit that I need some degree of belief to be convinced that all potential problems can go away. And their detailed knowledge of the biological structure has simply been impressive.

Tyler H. who is also a Christian from KY would often be able to see some potential "denial of the evidence" that seemed implicit in other participants' lines of reasoning. The young Gentlemen often tried to act more modestly than what his extensive knowledge of biology allows him to say. ;-)

The most general theme of the doubts about evolution was the idea - most quantitatively analyzed by Doug A. - that it is very unlikely for many mutations to occur simultaneously. Sometimes, many mutations (K) are needed for a new life form or a new life strategy to work. The required time may grow exponentially with K which quickly becomes hopeless if K is large.

It's a potentially good argument except that I don't think that it works in the world around us. First, it's often clear that things can work with K very small - one or two. The evolution of a complex eye is arguably the closest "proxy" to the anti-Darwinian argument claiming that it only operates if all the features conspire but they are unlikely to occur at the same moment. Indeed, the eyes are very complex and rely on the interplay of many components.

However, eyes of more primitive animals actually show exactly the kind of evolution that tells you that the evolution can be decomposed to K=1 or at most K=2 steps - and each of them brings evolutionary advantages - because there has always been some room for incremental improvements. The eye was getting deeper, the resolution grew because the animals could see more, the lens would also develop, and so forth.

Unlike others, I think that this "irreducible complexity" is a great potential method to falsify a whole class of theories. It is a great idea for a "litmus test" and the people who say something else are as blinded as the most religious ID advocates. However, when you look in the real world, I don't think that you will find contexts in which this falsification is actually possible.

There are also other issues in which I find the critiques of evolution to be contrived - even if you forget about the existence of other potentially "belief-based" reasons linked to the "big picture" that indicates that the things should have evolved naturally. It has often been assumed that the mutation rate (especially the rate of "useful mutations") was low, only local mutations contributed, and so on.

Well, if one wants to prove that a class of natural mechanisms is impossible, he should allow the mutation rate etc. to be as high as Nature needs, and find the maximum of Nature's ability to evolve the new things over the space of possibilities. If things don't work for one value of a parameter (or many parameters), it doesn't mean that they work for no value of the parameter.

After all, Robert S. who is a top and pioneering champion of the "metabolism first" theories - life didn't start with RNA but some self-feeding protein-like molecules - was emphasizing similar things. In some chemical environments, the mutation rate could have been higher which may be more helpful for you if you're Mother Nature and if you want to evolve highly revolutionary new life forms. ;-)

I did expect the opinions of Robert S. to be compatible with mine before the meeting. So needless to say, despite my highly limited degree of religious inclinations, I was more compatible with the participants' opinions about the big questions than e.g. in the Academia.

But back to the possible anti-evolution arguments.

Another thing is the role of other types of processes (aside from point mutation) that may modify the genes - such as breeding. They were largely neglected. New operating systems are not created by a sequence of "point mutations". Copying-and-pasting is often important, too. The male and female parents may be more likely to combine their advantages, giving birth to offspring that may have all the advantages and making it easier and more likely for Nature to overcome the irreducible complexity problem even if one existed.

We also had some doubts about the relevant size of the population that was enough to obtain certain new traits and the relevant fraction of the population at various stages. Doug A. did a good job to explain and localize these problems but there always remained a "mysterious component" that prevented us from checking the numbers, even as order-of-magnitude estimates.

In some sense, an "exponentially infinitely large" population is enough to get whatever you want. It may be vacuous to think about "infinite populations" because they start to resemble the anthropic multiverses where arbitrarily unlikely events - e.g. the evolution of insects from flowers (isn't it a great idea of mine?! Look at the shapes and flavors, it may work) - become possible simply because of the large number of possibilities. The best forms may eventually flood the environment because of natural selection.

Of course, I am convinced that if all these tests of evolution were done in their full glory and if you used the correct natural model with a realistic choice of the parameters, it would be possible and likely for the life forms to evolve naturally. But yes, I do agree that this belief of mine is a belief - and that many explanations that evolution works are sometimes artificially constructed just for "some explanation" to exist, and the particular explanation doesn't have to be correct - a point emphasized by G. B.

I could add comments about interesting discussions with Arthur C. or Stephen M. At this moment, I have already listed all the "intellectual" participants of the meeting. The surnames are deliberately shortened to the initials to make the description semi-anonymous and I ask you to keep this format in the comments, too. It's not the job of the Internet readers to know absolutely everything about any semi-private event anywhere, is it?

Your humble correspondent had to say lots of things about the inflationary cosmology, eternal inflation, why this may be believed or not, and so on. Towards the end, it got harder because of some crazy late-spring cold (possibly induced by some allergy) but I worked hard.

The other folks were listening. Although high-energy theoretical physics represents the "opposite end point" of the spectrum how seriously a person may consider arguments based on mathematics, I think that everyone listened carefully and thought about the arguments and concepts intensely.

I have also spent an hour with Peter T. Our discussions focused on particle physics and the general opinions of the billionaires, among other things, but again, not everything should be reproduced in the blogosphere. It was a very interesting meeting.
Luboš Motl v 10:18 AM
Share