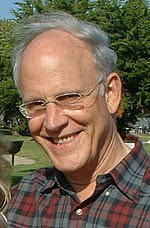 David Gross's talks have been linked or embedded into The Reference Frame many times.

But what can you do about it - he's just a favorite speaking physicist of mine - not only because I agree with 99+ percent of his opinions about fundamental and particle physics. ;-)

He considers the LHC as the greatest technical achievement of mankind - our generations' answer to the pyramids.

Gross shows how the collider began to produce data. For example, in 2010, it reproduced the 1964 discovery of Omega minus. Fourty-six years ago, one event was enough to find it and no automatization was used in its analysis.

These days, people can't even understand that one event may be enough and that this kind of physics may be done without computers.


David Gross seems to be confident about his knowledge of the LHC events. So he's showing chaotic pictures of the trajectories, making you feel that he can really see it is a Z-boson or a W-boson. ;-)

At 7:00, he turns his attention to the theory which has been doing well since 1964. The Standard Theory - which is David's proposed new name for the Standard Model - is so successful that it's been deeply frustrating both for experimenters and theorists.

The SM is not complete because of various reasons. Experimentally, it is because of: dark matter; neutrino masses (easily added); baryon asymmetry; cosmic acceleration (the C.C.). Theoretically, it is because of: the lack of unification; the hierarchy problem; unexplained subtleties of the matter sector - number of generations, masses, mixing; cosmology, inflation, vacuum energy not incorporated.

In 1993, Gross gave a talk a the Lepton and Photon conference. At that time, the SSC was being built and it was approaching its death, too. Gross gave ten predictions about the HEP experiments between 1993 and 2008:
Ten more predictions for the theory were discussed.
I agree that he did pretty well - 50% score is good enough for these rather specific statements. His new 2010-2020 predictions say
I am not sure about the U.S. becoming another European country (it's 50:50 for me), I am not sure about the progress about the C.C. (also 50:50) and I would bet that new Z-bosons are somewhat "less likely than yes" but otherwise I share these predictions.


By the way, a few hours ago, The Register and BBC did a very good job in explaining the muon-antimuon anomalous difference measured by D0 at the Fermilab a month ago. Just like your humble correspondent did, Paul Rincon says that if the signal is real, the most sensible explanation is a collection of five God particles instead of just one Higgs, a multiplication predicted by MSSM, e.g. in the "uplifted supersymmetry" region promoted in a preprint by Dobrescu, Fox, and Martin.


David Gross enjoyed the conference because no one said the words "anthropic principle". David smashed the arrogant theorists who boast that the questions that they can't answer can't be answered. ;-)

In 1937, Dirac discussed the "large number problem", the existence of very high (or very small) dimensionless ratios in Nature. As a great physicist, he avoided the anthropic arguments even though he could. Instead, he has proposed to link all the large numbers to one of them - the size of the Universe in atomic units (a figure that keeps on increasing) by various mechanisms. His theory predicted the cosmological evolution of the constants and has been ruled out.

Dirac's particular "large number problem" - about the "M_{Planck}/M_{Proton}" ratio - has been solved by Gross and friends. It's due to asymptotic freedom. The strong coupling runs logarithmically, so from a sensible value such as 1/25 at the Planck scale, it inevitably reaches the value g=1 at an exponentially lower scale - and this is where the masses of the hadrons inevitably sit.

This success gives David (and me) the belief that an analogous success may explain the tiny C.C., too. Gross mentions that the C.C. is "just" 64 orders of magnitude below the order-of-magnitude predictions from SUSY. The C.C. is the quartic power of a mass, so the mass scale itself is just 16 orders of magnitudes off. We did better with the QCD, not a huge problem! ;-)

We've done it before. We just need more hints. The fun is just beginning.