Gábor Dénes was born into a Jewish family in Budapest on June 5th, 1900 which makes it easier to calculate his age at various moments. ;-) In the World War I, he already served with the Hungarian artillery.

Of course, they lost but he didn't mind, unlike the current Hungarians who just declared the anniversary of the Trianon treaty an eternal national day of mourning. Czechs and Slovaks also lost but they became victors by creating Czechoslovakia. The Hungarians didn't have this option because it's much harder for the Hungarian freedom warriors to declare independence from the Hungarian expansive imperial bastards, especially if they're the same men. ;-)


If you follow Central European politics, you must know that Hungary also established a new law allowing ethnic Hungarians in any country to acquire the Hungarian (and dual) citizenship. Slovakia's speedy Parliament neutralized this Hungarian law on the very same day by another bill that removes the Slovak citizenship from anyone who would dare to accept the Hungarian offer and forces him or her to pay a fine. :-) 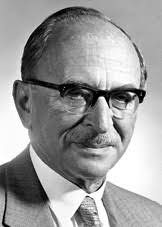 But let's go back to some more serious issues from Dennis Gabor's life. After the war, he studied in Budapest and later in Berlin where he played with plasma lamps and cathodes (cathode-beam oscillograph). For a work on cathode ray tube, he received his PhD in 1927.

You may ask why he didn't play with lasers if he secretly planned to invent holography 20 years later. That's a great question but not too great. :-) The first laser was built in 1960: we celebrated the 50th anniversary a few months ago.

Fine. As a Jew, he had to escape from Germany in 1933. A British company offered him a research job, he met a nice woman, and acquired the British citizenship in 1946. That was a good choice for the U.K. immigration officials because in 1947, he would invent holography.

Now, you may be shocked how he could possibly invent holography in 1947 if the first laser was constructed in 1960. Well, he would be doing experiments with heavily filtered mercury vapor lamps and he probably only get the idea. To make the holograms nice and viable, the laser was necessary and the first hologram was built in 1964, bringing Gabor the 1971 physics Nobel prize, besides many other awards he collected before he died in 1979.

He also researched human hearing and communication, inventing granular synthesis (some sequence of overlapping/transmuting elementary units of sound, or whatever is the right definition) along the way. If you play the following example, you will understand why Iannis Xenakis, a Greek composer, claimed that he was actually the first inventor before Gabor:

If you don't see a button above, click here.

Why it sounds like music sounds Greek to me - so it may be Greek music, after all.

The hologram is, of course, the most important discovery or invention by this physicist. It is a 2D picture on a film but if you look at it under the proper light conditions, you will see a 3D object. How is that possible? Well, imagine that you have a point-like object somewhere in 3D space.

That's your hologram. It's easy to calculate the strips you will get.

Now, to look at the hologram properly, take a similar laser and shine it upon the photographic plate. It will inevitably create configurations of electromagnetic waves that are related to those you started with. It's not quite identical but if you investigate the details, you will see that the observer really does see the "virtual 3D object" reproducing the original "model" behind the plate, regardless of the angle he looks at it.

One subtlety is that you only record the interfering amplitudes by their squares i.e. the intensities - and the squared amplitudes then behave as amplitudes themselves. But it's OK if one source is significantly bigger than the other one in the interference: the linearization is OK. I learned how to do these things - and thousands of similar fun things in physics (such as the exact formulae for the angles in the rainbow) - before the Rutgers qualifiers.

I spoke about one point because I actually encourage you to calculate the shape of the interference pattern for one point and prove that it works. It works for more general objects, too.

While Gabor's holography is an artificial piece of engineering, the good news is that Nature knows these robust tricks, too. In 1992, Gerard 't Hooft and Leonard Susskind argued that every theory of quantum gravity must be able to encode the information about the 3D objects on the 2D holograms glued to the boundaries of the region where the 3D object lives. That was partly inspired by the black hole entropy - proportional to the surface area of the event horizon - and other considerations.

Juan Maldacena's 1997 AdS/CFT correspondence became the most specific and quantitatively verified example - or class of examples - showing how the holography works in practice.

At this moment, it is important for the beginner to understand that the "holographic principle" in quantum gravity is not the same thing as "holography" as invented by Gabor. But they're closely related, anyway. In both cases, the "holograms" has a lower dimension than the object (by one) and remembers its position in the additional dimension essentially because of the distance between the strips of the interference pattern - kind of the local wave number (and/or frequency, if time is another dimension of the hologram) of the interference pattern.

In the case of Gabor's holography, we only want to encode the shape of a 3D object - it's harder to make it colorful etc. In the case of quantum gravity, the "hologram" of a physical system is actually able to remember all the properties of the object and to calculate the exact evolution of the higher-dimensional object by some well-defined evolution laws controlling the hologram only.

The holographic principle not only constrains the total amount of information that can be squeezed into a volume in a quantum gravitating theory: it also implies a full equivalence between a description in the "bulk" - which explicitly includes all the dimensions - and a description on the "boundary" - which hides the existence of one dimension, the radial one.

The holographic principle therefore means more than just the entropy bounds but whether it is true and useful has been only definitively answered in the case of the anti de Sitter space and spaces that may be viewed as its deformations - and whose geometry is similar, at least near the boundary.

Holography is a great invention and the holographic principle is a great discovery - and 't Hooft and Susskind chose an appropriate name because of these obvious analogies. But they invented something more than just "why don't we create a hybrid of quantum gravity and Dennis Gabor". They discovered something that actually works, Nature knows it, and it also allows us to calculate many things by looking at a seemingly completely different object (with a different number of dimensions).
Luboš Motl v 5:30 PM
Share