Calling it a cover-up would be far too dramatic. But for years, Internet users were satisfied with a search engine, Google, that - much like the Standard Model - was neglecting one of the four fundamental forces of Nature: gravity. But they were aware of a dark cloud looming on a distant horizon.

Finally, Google managed to incorporate the laws of gravity into its Internet search engine. All objects should be accelerated by the Earth's gravitational field in the same way. The Internet searches are no exception. Today, Google has become consistent with the equivalence principle. Try it:


The new unified search engine works. You should actually enter a query, e.g. best physics blog, into the well-behaving box and check that all the hits behave in agreement with the equivalence principle, too. If a nitpicker complains that there are too many objects at the bottom of the screen, he can always drag the object to the top with the left mouse button pressed. Gravity and free fall don't kill you: it's only the f-word collision with the Earth that does.

I am sure you will find the new search engine very handy! ;-) 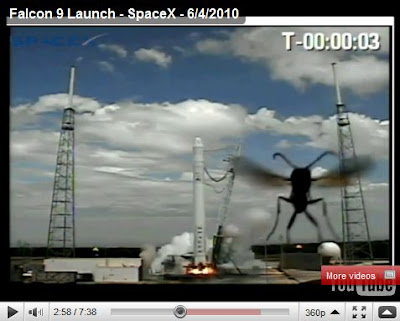 Three seconds prior to the Falcon 9 launch, a giant fly - a mothra - decided to quickly sit next to the spacecraft and compete who gets to the orbit first and who can beat the other animal.
Luboš Motl v 8:46 PM
Share