If Greenland melted, sea level in Iceland would drop

Eduardo Zorita wrote a very amusing and insightful text about the sea level rise induced by the melting of Greenland - as a function of the position on the Earth. This effect is caused by Newton's gravitational force coming from the ice.

A cute town in Greenland

I just made a full-fledged calculation in Mathematica and I can confirm the basic statements by Eduardo. They're kind of funny. Here is the summary:


Indeed, if the average sea level rise induced by the melted ice of Greenland is 7 meters, the rise of the sea level at the antipodal point would be around 8.3 meters.

Below 1,700 kilometers, the elevation change would be negative, and it would behave as -1/D for a very small distance D. The simple formula implies about 25 meters of sea level drop at the distance of a few hundreds of meters.

Of course, the point mass approximation can only be trusted if D is kind of greater than the actual radius of the ice - around 1000 kilometers. Later, I may make a more accurate calculation that takes the actual pancake-like shape of the ice into account.

However, it's still clear that Iceland, which is only 1,000 kilometers from the center of Greenland, would see its sea level decrease. The Western European beaches which are about 3,000-3,500 km from the center of Greenland would experience about 4 meters sea level rise - about 1/2 of what the people on the other side of the globe would experience.

Here is a sketch of the basic steps you need to know in order to understand or reproduce my calculation in Mathematica.


First, you define various constants - Newton's constant, the radius of the Earth, the total mass of the Greenland ice (density times sea level rise of 7 meters times 2/3 of the Earth's surface), and others.

Second, you imagine that after the Greenland ice melts, the surface of the ocean will be spherical because it will be the surface where the gravitational potential from a spherically symmetric mass is equal to an appropriate constant.

The actual Earth is not quite spherical - but the additional non-uniformities from the rotation and gravity induced by mountains etc. may be additively added to the effects of the Greenland ice. In the first approximation, the effects may be linearized and added. The second-order effects are negligible.

The average elevation of the ice is 2,132 meters so the average height of its center-of-mass is one half of it. But this won't play too much role. One kilometer is negligible relatively to the radius of the Earth - and even relatively to the horizontal extent of the ice. What will matter is the distance of places on globe from the center of Greenland - and the elevation may change it at most by 1 kilometer.

If I haven't made it clear yet, the new effect comes from the gravity induced by the ice itself.

So how do we calculate this effect? Well, qualitatively, if you add the ice above Greenland, its gravity will be attracting the nearby liters of seawater more strongly than the distant ones. That's why in the presence of the Greenland ice, the sea level will actually be higher near Greenland.

This argument is most obvious "right below" the mass of the ice. Today, the seawater is being attracted in the direction "up".

Consequently, the only thing I need is to calculate the gravitational potential from the body of ice at various points of the globe. I parameterize the Earth in modified spherical coordinates that have "theta=0" in the center of Greenland - a shifted "North Pole".

Here, I am cheating a bit. The continents are not uniformly distributed while I assumed that they are. But it's not too big a mistake because a vast majority of the water will be shifted at distant enough places where the sea level rise will be around 7 meters, anyway. And the land-ocean distribution in this bulk is pretty uniform.

We have obtained the required sea-level correction (that averages to zero), as a function of the distance from the center of Greenland. We may simply add 7 meters to get 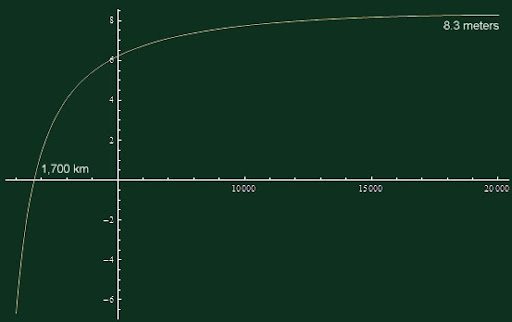 The x-axis is the distance from the center of Greenland measured along the surface; the y-axis is the total sea level rise from the melted ice.

You see that below 1,700 km from the center of Greenland, the sea level rise is negative. In the mass point approximation, the graph would continue as "-1/D" for very short distances. I believe that up to -10 meters could be realistic.

Clearly, the melting ice is not a problem for the immediate vicinity of the island whose ice melts. In fact, some very close points could experience dropping sea level. For example, for the Europeans and the Americans, it's much more important what happens in the Antarctica. And be sure it won't melt anytime soon.

Thanks for the link to Climate Audit

Sorry, I don't want to post the source as files because it is too simple and unrefined. So you may just copy-and-paste it if you need it:

(* After Greenland ice melting, the Earth is sphere of radiusEarth *)
\