In California, people can only see iPhone 4, Apple's future super mobile phone model, if they find it in the pub and steal it. As Steve Wozniak's T-shirt says,


"I went drinking with Gray Powell and all I got was a lousy iPhone prototype." :-)

The situation is much better in the Czech Republic. No one has to steal anything - and if he has to, no one will ever find him. :-) The Apple fans have a few servers, including Jablíčkář.cz - the domain name refers to a poetic name for a "guy of little apples", a kind of a derived word that you can only construct in Czech.


A special article has provided its readers with a lot of information about the next generation iPhone; they received the data from a happy user nicknamed Swenak who claims that the phone is very fast and robust. An exclusive landscape video taken by iPhone 4:

See a backup of the video (MOV, high definition) or YouTube (II). It produces something like 80 MB of compressed high-definition output per minute. You won't have to be ashamed for the quality. In fact, it looks much better than the videos produced with my most recent camcorder. ;-) 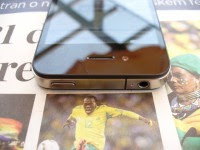 Photos of a Czech landscape taken by iPhone 4:

Picture of iPhone 4 placed on some Czech newspapers from the last weekend. The user was looking for some streets in Prague:

The third picture, Pic 3, is claimed to contain evidence that the user was registered with the O2 Telefonica provider. Its main competitors in Czechia are Vodafone and T-Mobile.
Luboš Motl v 7:29 PM
Share