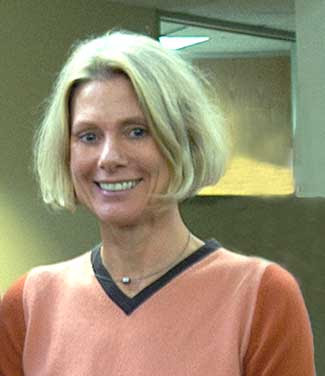 That's her. She's cute, isn't she? But that's not the point here.

(Her CV lists some lower-grade institutions and reveals she didn't get an academic job at some point. And her education is in environmental and atmospheric sciences only - no solar physics etc.)

On Thursday, Mr Vítězslav Kremlík (Czechia) discovered an interesting fact. The analyses of the influence of the Sun on the climate in the latest IPCC report relied on one solar physicist, Dr Judith Lean. He published the finding on his Czech blog, klimaskeptik.cz (and kremlik.blog.idnes.cz)

and it went viral. Judithgate has joined the dozens of similar scandals revealing the true character of the IPCC activities. By the way, Sean Carroll has hid his head in the sand and he decided that the ClimateGate has evaporated. Congratulations to your solution to the problem, Sean, but don't get suffocated!

- to claim that the solar activity didn't rise when the global climate was heating up a little bit in the recent decades. There were no other solar physicists or astrophysicists in the IPCC.

The influence of the Sun is a pretty important question, isn't it?

Isn't the Sun a conceivable factor that could influence things? Even the people who like to believe the IPCC conclusions seem to agree that it's very bad if such a report depends on a single paper and a single IPCC author who actually finds herself in a conflict of interest because she's a co-author of the single paper that the IPCC evaluates. ;-)

In fact, if you click at the word "agree" above, you will find out that a total of six "solar" papers were suggested for inclusion, much like a couple of people who understand cosmic rays. But the proposal was rejected - so the IPCC only relied on a single "solar" paper and a single solar/astro physicist.


Mr Kremlík has written numerous articles in English. But the single article that has become globally famous - at least so far - was written in Czech, Mr Kremlík amusingly noticed with a bottle of champagne in his hands. :-)

Several TRF readers learned how to visit klimaskeptik.cz regularly because there's some good stuff over there. With Google Translate, the language barrier is pretty much unimportant. So someone discovered this cool observation by Mr Kremlík (I didn't promote this particular URL on my blog!) and the gospel quickly spread to discussions at WUWT, ClimateDepot (main headline), Hockey Schtick I & II, Climate Realists, Climate Change Fraud, Prison Planet, and others.

This is a typical story showing the character of the "consensus".

Whenever there are questions that really matter, the IPCC minimizes the number of people who have something to say about the subject - because many people could make the situation "complex". The purpose of this strategy is clear: the small number of authors (in this case, a single author) are expected to say that nothing aside from CO2 really matters - so that the important question isn't even discussed.

This task for Ms Lean was determined from the very beginning: after all, this task is what the IPCC is all about. She was selected for her ability to fulfill this task in a disciplined way which is what she has done, indeed. She may be a fine scientist. But the way how she was chosen - and the fact that no one else was added - speaks volumes.

The 35-minute 2009 talk by Willie Soon above discusses Judith Lean, too. She appears around 14:50. Her bias is demonstrated by several quotes and cherry-picking in the construction of graphs. I recommend you the whole talk. It starts by some niceties but there are also useful explanations of the Milankovitch theory - why some places matter, and not the solar radiation over the whole globe etc.


Finally, some entertainment by klimaskeptik.cz: Pachauri von Bollywood (Rajendra as an entertainer)

Jon Stewart's show, via Vitalik. Obama has promised it's the moment for the U.S. to become independent of foreign oil. And what did the


The Google News hits for global warming (during the last 30 days) dropped below 10,000 for the first time in the history of the server. The maximum number was well above 50,000 two years ago or so.
Luboš Motl v 7:35 PM
Share